I just love working with the Hero Arts CL945 Color Layering Goldfish stamp set which I had purchased at Tupelo Designs. But I was curious if goldfish were in other colors then gold and I did find that by using a search engine that they were. One color was more of a reddish look to it so I decided to try my hand at making a card with those colors. 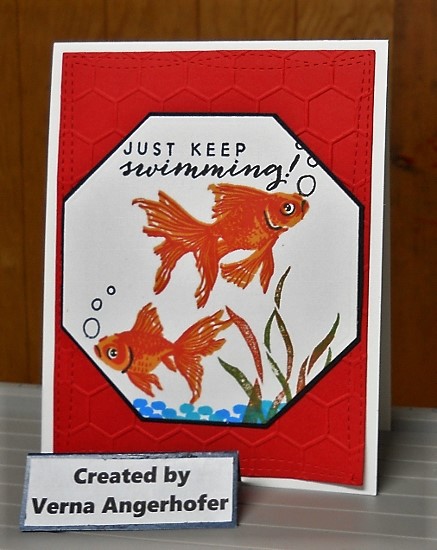 I just love how the fish looked and for them I used Gina K. Designs Red Hot, Sweet Mango and Black Onyx inks. For the grass I used Red Hot and Fresh Asparagus. The stones were stamped with Blue Raspberry and Blue Lagoon and of course, the sentiment was stamped in black as were the air bubbles.

I die cut the scene out using an old Spellbinder set of mine called Large Octagons. I then outlined the scene with a thin layer of black. This was placed on a red panel which was embossed with a Darice Honeycomb folder and then die cut with a Die-Namics MFT-839 Wonky Stitched Rectangle Stackers die. The card was completed by placing all onto a white card base.

I am entering this in the a2z Scrapbooking February 2017 Challenge-Any Shades of Red and also in the Mod Squad Blog Challenge in which we are to use geometric designs. I guess a hexagon and a rectangle will qualify for that too.

Well, it has been a busy week. I cooked huge batches of potatoes as they are not keeping very well with this warmer weather and froze some as hash browns, some in mashed potato blocks and some as scalloped potatoes. It is a way of saving them and also makes for easy fixing later on too as most only have to be reheated in the microwave or fried in a pan, I can just take out the amount I need. I worked on that for three days.

Next week I am hoping to tackle some rearranging of my art supplies and purge a little. We shall see how that goes. And, the snow missed us but we are having colder temperatures. I hope that the winter weather for those who received it will not be too upset as with it coming at this time of year we know it won't stick around long.

Have a good weekend. And thanks for the comments too.
God bless,
Verna

Wow! Another fun and really gorgeous card from you. I love the die cut that you used to cut out the whole image. I reminds me of a fish bowl.

I like a good reddish goldfish lol When I saw your post title I immediately thought of Dr. Seuss lol This is a cute card, very goldfish bowly :)

Cute fish, Verna! Great job with the layering stamps! I like the hexagon too!

I have that set, think I mentioned that before, and it's so much fun to play with it. You have really outdone yourself with the great colors. And I love how you have cut the hex shape, really nice.

Another cute one. Love seeing what you do with the layering stamps. Had a couple years ago but they are long gone. :)

I love your card! You did such a great job layering those goldfish and your shapes are perfect for our challenge this week! Thanks so much for playing along with us at  The Mod Squad Challenge Angie, Challenge Host

Sometimes a person needs something to just keep on swimming. Wonderful card. So glad you joined us at A2Z Scrapbooking.

And thanks for entering this in the a2z February challenge too!!!

How cute! That sentiment is so true at times, isn't it? That embossing works so well with the fish bowl too!

Lovely card! I like the colours you used for the goldfish and the embossing on the background.

Nicely done, those fishes are really vibrant!! Thanks for joining in the fun at a2z.

Every time I see this card, I smile, Verna - it's especially meaningful to me. I have been in a full exacerbation the past 2 weeks, using a walker, and unable to do most of the things I enjoy doing in a more "normal" state. I just keep on swimming LOL, learning how to cope in the current state of things, knowing this could be permanent, but likely will pass as the weeks and month progress. At times like this, the State of Grace is overwhelmingly kind, and little pretties, such as your gold fish and endearing, encouraging words, make life happier.

BTW, did you see you won? http://www.christinahordesigns.com/2017/02/update-hug-heart-card-drive-prize.html

Congratulations, Verna! Check out Christina Hor's blog! You won something! Woohoo! Have a great day, my friend!

Oh i love those fish and sentiment. Fabulous scene.
Thank You for playing along with a2z Scrapbooking February Challenge.

I haven't been to a pet store recently, but I think goldfish come in many colors, even mottled colors & black & white. Anyway, you are really loving those stitching dies; I love them,too. You sure worked in the octagons all over the place,the main picture and the background layer. Love it!!

THis is a beautiful card; I love how you incorporated hexagons onto your card. Thanks for joining us at a2z