Yesterday when putting away a few things I ran across this foiled paper I had done a few years ago and saw the wonderful shimmer and that it reflected in gold, silver and turquoise. I was then inspired to make a wedding card with it. I used the Bride & Groom die from Impression Obsession along with an Impression Obsession sentiment. The bridal couple was die cut from some silver glitter paper. I added some gems and as a result I am loving how it looks. So I guess just seeing a piece of paper can be a way to get one's mojo back. 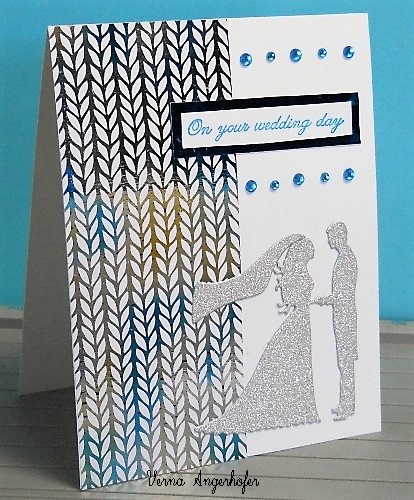 There are no weddings in the future that I know of but if any should be happening I am now ready with a card.

I am entering this in the Power Poppy Creative Confetti Challenge-Celebrate Good Times.

Thanks for all the wonderful comments and I hope your day is a great one.

Well I finally came up with an idea for my entry to Darnell's January Twofer Card Challenge #23-Hearts. However, my mojo has been on vacation lately so I am not as thrilled about these as I had hoped they would look. But at least I tried. 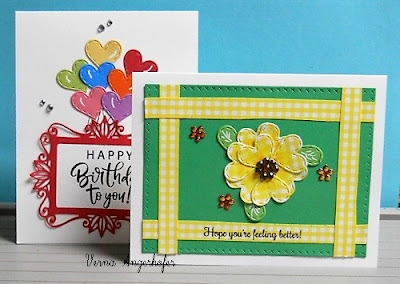 I decided to stay away from a Valentine and instead try to use these die cut hearts two different ways for two different types of cards other then the obvious Valentine. 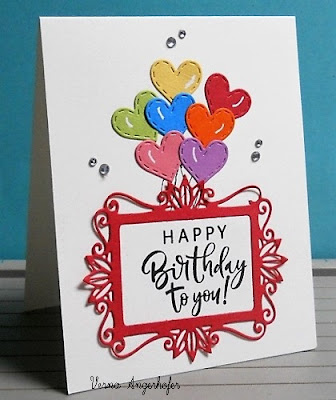 First up is a birthday card and I tried to make my hearts into balloons. I die cut several stitched hearts from Gina Marie Designs from different colors of card stock and then arranged them onto a white card base.  With a white paint pen I added some highlights to the balloons and with a black pen I added some strings. The sentiment is from Gina K. Designs as is the die. The sentiment is from the Sketched Wreath Builder set and the die is called Royal Frame Die. I added some rhinestones for more festivity to the design. 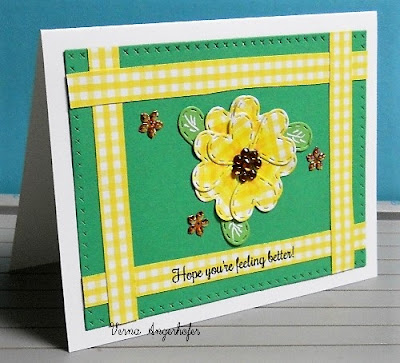 The second card design was a get well one and with the  hearts that I had die cut from yellow gingham paper I created a flower. I added some rhinestones to the center of the heart flower and also added some flower shaped sequins from Doodles Paper Playground from the Sparkle Blend:Flower Power mix. The leaves on the flower were one heart die cut in two. I cut some of the strips of gingham to make a frame and all of this was placed onto a green Memory Box cross stitched frame panel before adding it to a white card base. My white paint pen added some highlights to the leaves and a Bic marker added some highlights to the gingham flower too. The sentiment is from the Impression Obsession Life Stuff Sentiments stamp set.

I am also entering my balloon card into the Double D's Challenge-Balloons.

Well, that was my afternoon activity. I was surprised at how long it took for me to make these cards and perhaps that is because my "heart" was not into it.  LOL Take care everyone and thanks for visiting.

The Gina K. Designs Monthly Mix Challenge is called Let's Reflect! That means that you take a card you made last year and create a do-over of it. So using the same stamp set I re-created my card with different colors but with the same images. Below is my do-over design. 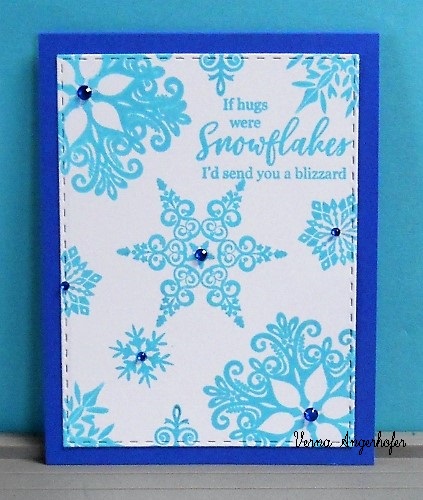 And below this card I made today is the one I did last year using the same Gina K. Design stamp set called Sparkling Snowflakes. I think in my opinion I like the black and white version better. 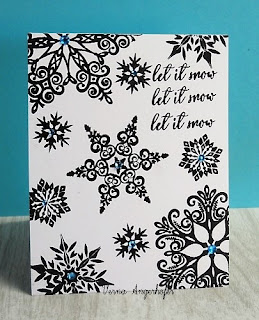 This year's model has a layer with the design die cut with a Maker's Movement stitched rectangle die. It was placed on a royal blue card stock base and then royal blue gems were also added to it.

But I really love all of these gorgeous snowflake stamps and when this challenge came up I knew this was the card I wanted to work with. I hope you like my new version too.

Ornament Card and Give Away!

Recently I was perusing the Kat Scrappiness website and saw this fantastic ornament die set that I just could not resist. So I ordered that along with another die or so I thought. But it seems for some reason two of the ornament dies jumped into my cart so I was so surprised when I read the order slip when they arrived and realized I bought two of them. So because of that I will be giving one of them away. With the one die set I am keeping I will share the card I made with it. I can see I will be loving this die for great Christmas designs. 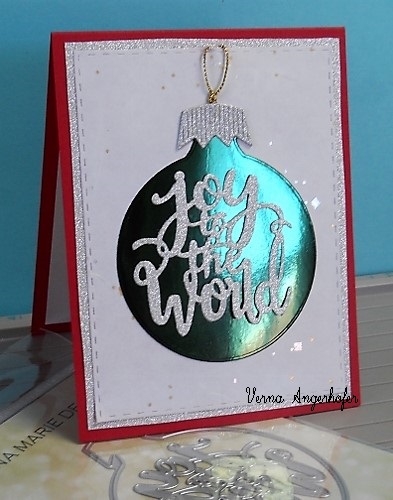 I die cut the Joy To The World ornament from some shimmery green mirror card stock from Crafter's Companion and the sentiment and topper were die cut from some silver glitter paper. The background paper I used was some my son and daughter-in-law gave me when they were home from Japan this last August. It has silver and gold flecks in it along with a few threads of silk. It is beautiful. I thought it worked well with this design. I also layered it to a silver glitter panel and then placed it on a red card base. The finishing touch was to add a white sheet of paper inside the card.

And here is something I often do. Where I had die cut designs from the silver glitter paper I was able to still use the leftovers to add a layer beneath the focal design. That way I was using every bit of the glitter paper. No one can tell that underneath there is a hole where I had die cut something out. The ornament design fit over that spot anyway.

Anyway, as I said the extra die I will be giving away. You have until Sunday 6 o'clock PM CST to leave a comment and I will pick one of those comments as a winner by doing it the old fashioned way of putting it in a container and drawing out a name. This is open to international comments as well. So good luck! I think whoever wins this die will love it too.

I was looking back and realized that I have been doing my blog for six years as I started it on January 4, 2014. I did not realize it had been that long. I guess it proves when  you are having fun the time flies by.

Well, the weekend weather prediction is for a winter storm so I guess that is what we have to look forward to. But in the meantime it is sunny and cold. It doesn't bother me though as I stay inside as much as I can. I don't trust myself walking on snow and ice if I don't have to.

I recently acquired the free digi from Power Poppy called The Rose. So today I worked with that digital image and also used a digi sentiment from the Big Ol' Bow digital set. Along with some dies I created a square 4 x 4 inch card. The Creative Confetti Challenge-Small & Sassy prompted me to make a small square card. And, the design was to be smaller then an A2 sized card. I hope you like what I came up with and I hope it will qualify as being sassy. 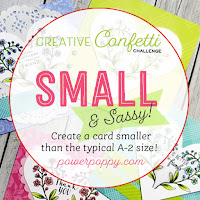 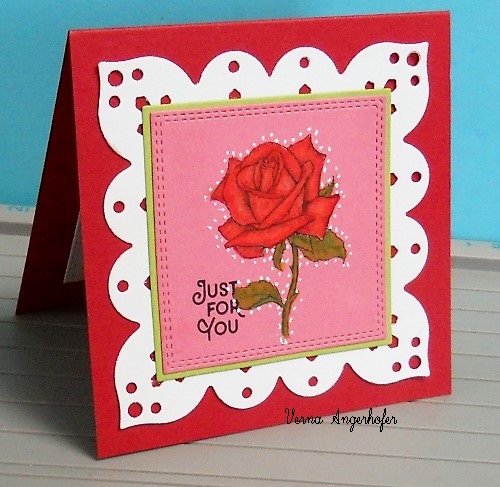 I took a break over the weekend but decided I better get back to making a few cards again. This is a card that could be used for multiple occasions too.

Thanks so much for visiting and for stopping by. I love to read your comments.

This is the third post of the day. I had to play some more with digis and for this card I used Jan's Digtals called Digi Key set. I bought it a few weeks ago and this is it's first outing for me. I will be entering this in the Jan's Digi Challenge #5-Anything Goes. 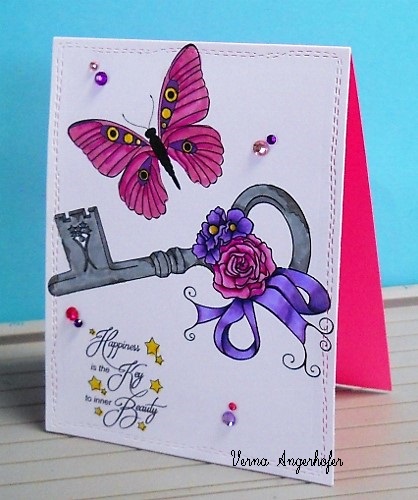 I printed this out with the colored images but I wanted my design to have brighter and bolder colors so I took my Bic alcohol markers and colored over the designs to make it match more with the colors I had in mind. I die cut the panel out with a Cutplorations die which is a division of Stamplorations. It fit perfectly to an A2 bright pink card stock base which I think gives an interesting look with the contrast of the white. And, the wonderful stitching on that die was deep enough that a slight bit of the bright pink shows through along the border. The finishing touch was to add some gems to the card front.

This digital set was one that Jan made up for the Turner Syndrome Awareness Hop which is to be held in February. Proceeds from the sale of the set goes to that charity.

Well, that is all for me today and maybe even for the weekend. I am thinking a bit of a break might be good as I have been doing a lot of card making lately. At least I managed to keep with my goal of at least two Christmas cards a week. I wasn't sure I would make it. That is the only New Year's  resolution I made again this year.

Enjoy your weekend and until next time take care. Thanks for visiting.

This is my second post of the day. I used the Artsystamper pine cone and pine needles digi stamps and created a simple Christmas design with them. I also added some snow with the Marvy snow marker and when it is heated it puffs up. To finish the card I added a sentiment from Gina K. Designs and a border of red glitter paper before I placed it on a white card base. 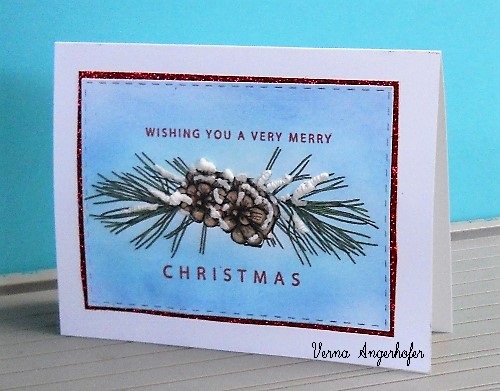 A very simple design. To enhance the look of the pine needles and pine cone design I brushed on some blue ink around it.

I am entering this in the Artsy Stamper Challenge #7-Baby It's Cold Outside. Believe me when snow falls I consider it cold.

Thanks for checking in. I will be back shortly with another post for today. So keep tuned.

Yesterday when putting away a few things I ran across this foiled paper I had done a few years ago and saw the wonderful shimmer and that it... 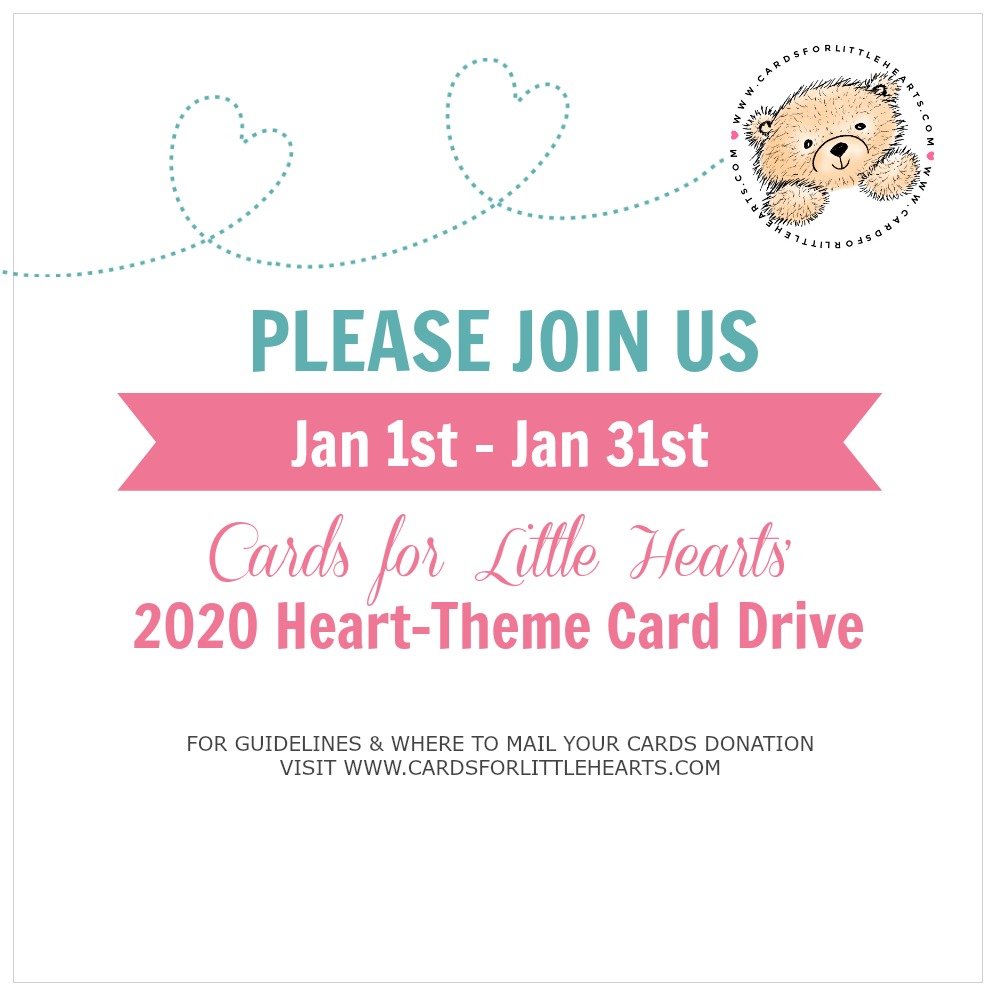