Today I am sharing with you a card I made for my son-in-law for his 40th birthday. I used a stamp set from Gina K. Designs called Simple Numbers which was illustrated by Tami Mayberry. Unfortunately, I do not see this set in the store so either it has been discontinued or it will be remade into a clear one. I like it for using on milestone birthdays. 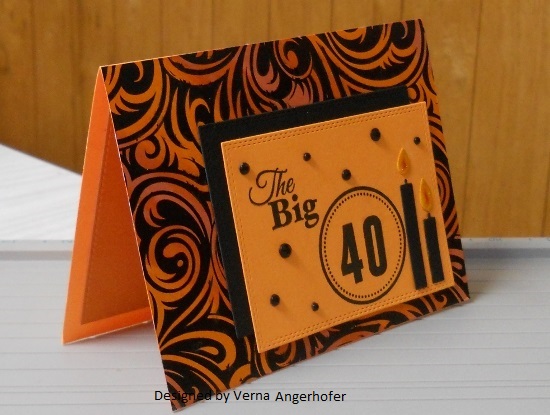 I also used some NBUS items at the time which were a Gina K. Designs Swirls & Flourishes Foil Mates set and also the Gina K. Design Rectangle Small double stitched die set of which both are from her new Therm o Web line.

I took the swirled Foil Mate design and first added some Gina K. Designs Tomato Soup and Peach inks to it and then put it through the laminator using Deco Black Foil. I maybe could have skipped using the black foil on it as the image is already black and white but I was anxious to see if it made a lot of difference. It did add a bit more shimmer but the black is not as shimmery as the metallic foils are. Either way it would have looked great.

That was put onto the base card of light orange card stock. I also took a die cut panel of that same light orange card stock and stamped The Big and the circle frame with the number 40 in it with Versafine black ink. The candles were die cut from the rectangle set of Gina's as they came with the set.  I offset this panel onto another black layer cut with the die set.  I  added some Wink of Stella to the flames and added a different shade of orange inside the card where I placed my message. 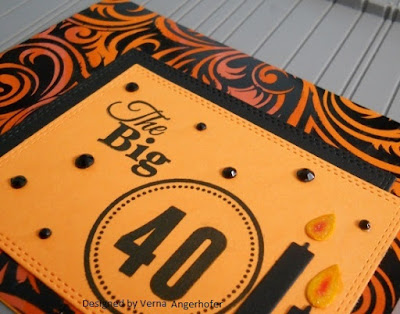 I really love how this card turned out and I hope my son-in-law liked it as well. He had a really nice party to celebrate the occasion too.

Well thanks for stopping in and for all your sweet comments. I look forward to reading them every time.

What a stunner! Fabulous male card and love the layout and colours you used Verna. I am sure he will LOVE it.

This card really "pops" and what a great way to celebrate a special birthday. Outstanding!

What a fabulous masculine card Verna and that foiling technique looks so interesting! I bet your SIL loved it!
Hugs
Carol x

What a handy stamp set....I have never seen it. Your card is fabulous, love the colors and that foiled background. Super!!!

Fabulous card, love the orange with the black, very striking. Thank you so much for joining us at Simon Says Stamp Monday Challenge. Hugs, Sandra