Time for the September Rudolph Days Challenge so I made up this card using an elf image from the Creative Visions Elf This stamp set. 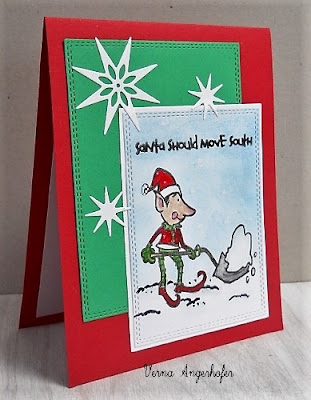 The image was colored in with Copics except for the sky to which I sponged a bit of light blue and then die cut using a Cottage Cutz double stitched rectangle die. I also  used that die set on the green layer. Oh, the layer with the image was added to some white card stock to create a thin border. I added all of these panels to a red card stock base and then used some snowflake die cuts from CAS-ual FRI-Dies called Funky Flakes for embellishments. Inside I added a sheet of white paper so that I can stamp or write a message,

Some Wink of Stella was added to the snow and flakes but I could not get a photograph to show that for some reason. It might be due to the bleak and dreary day we are having. It is supposed to be cold for quite a few days with below normal temps. And, in the western part of our state in the Black Hills area they are to get some snow. I am not quite ready for the white stuff here though. Maybe around Christmas Eve, LOL

Well, I am so happy you visited and I love the comments. Have a great day! And keep the snow away!

What a cute card this is Verna. I really like it. Barbxx

Heehee funny! Verna and so true!!

Funny card and I like the layout you used.

Oh how funny! I think this is going to bring a nice smile to somone’s face, so unexpected!

I really like this classic design with traditional colors, and those snowflakes are so pretty too!

Ha, funny! Maybe Santa agrees with him. Wonderful, easy to mail design for this, Verna. Love the double stitched mats and the snowflakes. Your sponged sky is very effective, too!

You made me grin with this quirky elf card!

It is so very fun and so cute. A really great card, Verna.

This is so cute! Yep, that would be here with the snow shovel. I really am not ready to hear that "S" word yet.

What a delightfully fun image, colored wonderfully. I love the bright colors and the placement of the mats on this layout. TFS & Hugs

That made me chuckle....lol! What a fun card!

Yes I agree...keep the snow away x Such a fun card, great sentiment and wonderful image x.

This is so fun! What a great little image and yes agreed - no snow yet!

He's so adorable! Love that image... do not miss shoveling snow at all...lol!

I think this little elf is absolutely adorable Verna, love the traditional colors and sketch as well.

First of all I want to wish everyone a Happy Thanksgiving! I am so blessed to have all of you as followers and good cyber friends. You alway... 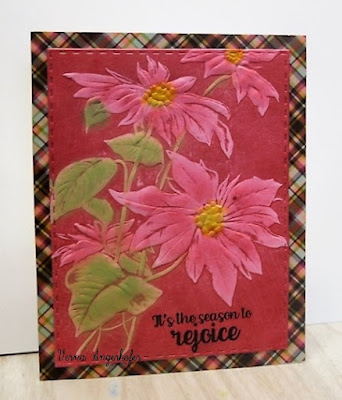