I cannot believe that it is the end of September already. How fast the time flies and during this last month I did very few cards. I bought a lot of stuff but did not have energy to use them much. But this week I managed to use one of the Altenew 3D embossing folders for an anniversary card. All the spending was done because I won a $50 gift certificate to Altenew so naturally I had to shop. Hahaa! 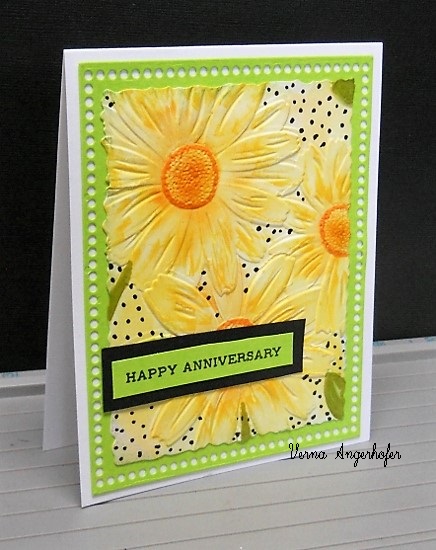 Also purchased from Altenew was the Mix and Match Frames set. I used two of the frames on this card. The sentiment is from the Altenew Sentiment Strips stamp set which I had purchased a few years ago. I use that set a lot. I added some black dots for a simple background for the daisies using a Bic black pen. The inks used were from Rubberstamper. And more accents were added to the daisy centers with another Bic pen.

Well, I wish all of you a wonderful October. Before we know it another year will have passed by. Until next time take care and thanks for the visits.

You are so lucky at winning! Yay for you. This card is awesome. Great embossing folder

Very pretty card, Verna! That embossing folder is wonderful! Congratulations on your win…what fun! Glad to see that you’re feeling a bit like crafting!

Well done winning, Verna, and getting awesome NBUS! I love your card design! It's just perfect for these cooler days of fall! Hugs, Darnell

Wonderful card, Verna. I love the embossing folder. Congratulations on your win. xx

What a wonderful folder Verna - a great buy. I love how you have used it on this fabulous card
Stay safe
Blessings
Maxine

Fabulous dimension, wonderful framing and the most beautiful and happy card Verna x. congratulations too with the win x.

I love these two colors, they make a bright and happy card. Congrats on the win.

Congrats on your great win, and you chose some lovely products to make this beautiful anniversary card! I love that giant flower! Happy October!

How fabulous!!! Coloring embossed images is really spectacular, thanks for the inspiration. You have done it perfectly here!!!

This is so bright and cheerful. Just seeing it makes me smile. I love the colors and pretty frames. Congratulations on winning the gift certificate.

Congratulations on your win! You picked a lovely embossing folder and made a beautiful card! I can't believe that it's October already!

Oh, super lovely!! Beautiful flowers for the anniversary card!! Congrats on your win!!

Lucky you! I love how you used the folder with the frame - and the black dots in the background are a fabulous touch!