Having a Wild, Wild Day!

Oh, no worry! Not a big party crowd around. Actually it is a pretty tame event as I am only making cards again, but this time I am using some wild animals and wild animal print elements.

The first one is a darling little tiger who looks like he might be up to something. He and the sentiment are from the Sparkle N Sprinkle Circus Plate 00-355P4. I found this fantastic pattern paper that was a gift from one of my daughter's and decided it needed to be put to good use. Why leave all these things sitting in storage because you love them so much you can't bear to use them just yet! So I decided now was the time. I colored this little tiger character with Tim Holtz Distress Markers and then fussy cut him out.

Oh, and the fiber was originally just black and white but I took the orange marker and made it to match my design. My first tip for you today.

I popped the black with the fiber over the pattern paper with double stick photo tape and then again popped the tiger image. The base card is white and I added a few black pearls to complete the card. 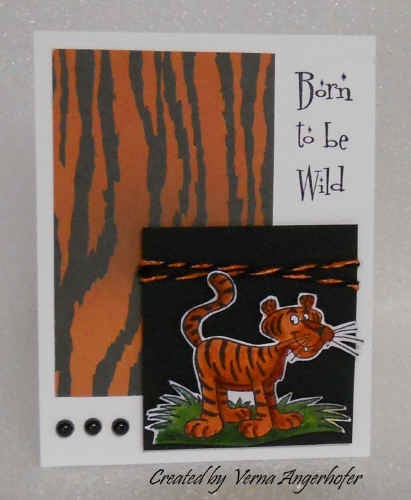 My other card I did features some Scotch ribbon that another daughter gave me which I am thinking may be a form of Washi Tape or facsimile. I was not sure if it was for a giraffe or not, but comparing my big giraffe image from I Brake for Stamps I decided it would work. I added the tape to white card stock, layered again on black and added a black and white gingham ribbon. Then the giraffe was stamped in a dark brown and then colored with Copic markers. The sentiment is also from I Brake For Stamps. 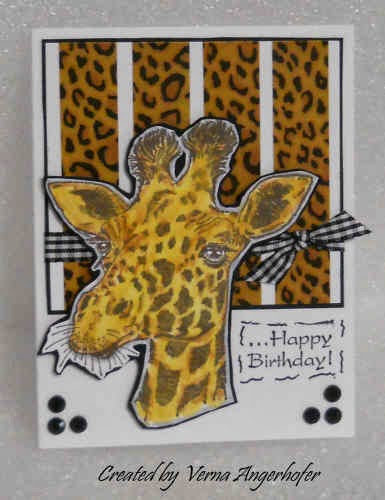 Oh, and have you ever made a little smudge from the edge of the stamp with ink around a sentiment? Well, I did, so I simply took a black pen and added more smudges to create a frame around it. I sort of like it. LOL So that is a tip to employ if such a situation happens again. Gotta remember that!

Oh, and before you delete what you think is a blurry photo....clean your glasses first if you wear them. And, especially so if you are partially blind in one eye! I could not figure out why all the photos had a big blur on them.  What a dope! So now don't say I didn't give you a few tips today as well.

Take care and God bless! Have a great day!

What a couple of great cards Verna! Love all the little tips you put in there too! I hear you about the glasses - been there, done that!

gorgeous as usual. makes me miss stamping, but not quite enough to begin again. will keep on crocheting and sewing..
take care

Great cards, Verna! Love what you have done with both cards - employing wonderful techniques and disguising your smudge LOL I get lots of smudges in my stamping, which is why I'm leaning more and more to digitals LOL Your cards are great and thanks for all the tips (I cleaned my glasses LOL) hugs de

Love both those cards! I actually have the same scotch tape that I have been using little by little over at LEAST ten years! This was a great inspiration for another use for it, thx!

Those papers are perfect for your critters! Great job.

Awww these are so precious Verna!!! Great designs and love all the animals patterns!

Love your wild cards,Verna! Great tips too. I've covered up smudges in similar ways. We live and learn as we go along, don't we?

Verna, you have created a jungle out there!!! Your cards are awesome! I have never tried making this type of card, and I simply love both of them - especially the giraffe. My daughter collects them, so I am partial. And I know what you mean about holding on to stuff. I have lots of wonderful papers that I just don't want to use because they are too beautiful. WHAT IS UP WITH THAT?? Defeats the whole purpose, right?? Haha!! Great job on both cards!!!

LOL! Boy, can I ever relate to the smudges being on my own glasses and feeling like a dope!! Made me guffaw, Verna! I love your cards today! I especially love that adorable tiger card!! And thank you for all the useful tips!! Have a great weekend! Hugs, Darnell

Great animal cards Verna! Love all your tips too!!!