Normally, I am not into shabby chic and thus I am not even sure if this really qualifies as I am so inexperienced with it, but I tried my best to create a combination of shabby and chic with this card. And, due to a sore shoulder blade and arm I made it fairly clean and simple since it was very hard for me to crank my Big Kick this week. Maybe it is the weather affecting it as we are in a cloudy dreary type of weather pattern now. We even got freezing rain over the weekend. 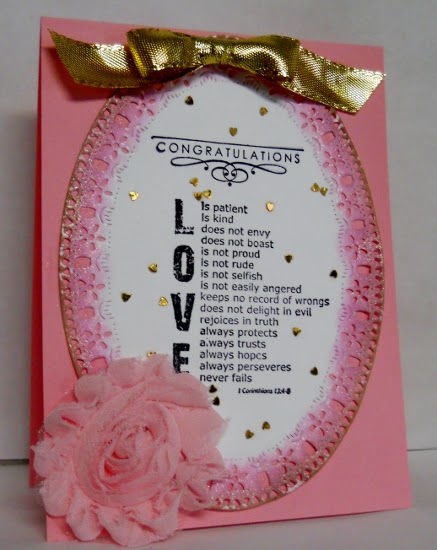 Since there are many weddings and anniversaries coming up I decided to use the most recent incentive stamp from Gina K. Designs which is called Love Is along with a past Gina K. Designs incentive stamp called Congratulations. I simply stamped both of those in black ink on the center panel of white card stock which was die cut using the Cheery Lynn Designs DL 183 Oval Doily Stacker One. I used the middle sized one and sponged it with Gina K. Designs Bubble Gum Pink and Kraft inks but also added some Wink of Stella in clear which gave it a golden shimmery look.

Also incentives from Gina K. Designs are embellishments from Sweet Forever called mini heart spangles. I chose to go with the gold ones which also worked with my choice of a gold bow.

To complete the chic look I added a shabby flower which was gifted to me in a prize package. I thought it made the simple design look more complete with it's addition.

This card will be entered in the Mix It Up Monday Challenge at Stamp TV this week and it calls for using hearts but not on a valentine. I am also entering it in the Cheery Lynn blog challenge in which we are to use pink.
at February 09, 2015

Lovely shabby chic card, Verna, I have trouble with that technique too, lol. That stamp looks wonderful on your Cheery Lynn doily. Good luck and thanks for joining in on the fun at Cheery Lynn Designs challenge.

Well, I'm not sure I know Shabchic either, Verna, but to me it definitely qualifies! I love it!! I think it's perfect for a wedding or anniversary, not only because of the wise sediment, but because when I look at it, I see a man's golden tie for his tux and a women's beautiful corsage for her gown! Nifty!! Hugs, Darnell

Gorgeous - just imagine what you could do with two good arms? Just kidding- couldn't be more lovely.

Beautiful card, Verna! That stamp is so very perfect for an anniversary, wedding or even Valentine's. Love the flower and bow too.

Olga is right, could be fir either. Great idea for a card, don't do shabby chic myself, but looks good to me :)

Oh, I would totally consider this shabby chic. I'm not too good at that look either - I can never get it shabby enough...lol. This is an awesome card for any 'LOVE' occasion. Great sentiment! Love the the color, the sweet little gold hearts, and that beautiful flower too.

This is beautiful! You really showed off that stamp nicely.

Love this in pink with a pop of gold too! Very beautiful card and wonderful sentiment too!
Thanks for joining the Cheery Lynn Designs challenge. Good luck to you!

Well, it may have been freezing rain, but at least you were indoors being productive, Verna! Love this pretty shabby chic card! Congratulations on your recent publication, too! xo

What a beautiful match the stamp is to your Cheery Lynn Doily die! Lovely design Verna.

Thank you so much for joining us in our the fun at Cheery Lynn Designs this week. Best wishes!

Beautiful card. I'm no expert on shabby chic but this is a gorgeous card.
hugs, Asha