Well, by the title I think you know I made a card for the November-IBSI 100th Challenge. I thought a milestone like that deserved a bit of attention and since I happened to have a couple sets of their stamps I figured it was a great time to jump in and join the fun! 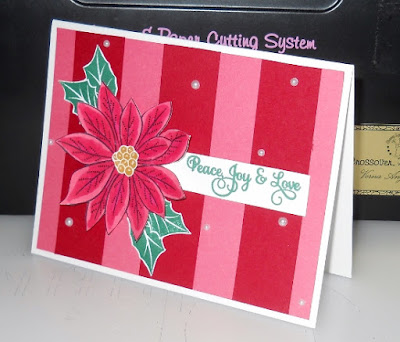 There were several color options and several sketch options for which one could use as an idea for the project and I went with a sketch which I thought this poinsettia image would look great on.

The set is from Inspired by Stamping and is called Poinsettias. It has six stamps included in it. I used one of the sentiments on the card after I built my background and colored the focal poinsettia image with Spectrum Noir Aqua Markers. I decided not to add the ribbon and instead added the holly leaves in a couple areas around the poinsettia which was popped up to give more dimension. I did however add several white pearls to give a bit of more elegance to the design.

For some reason it has been another rough weekend with my joints showing their usual aches and pains, but it seems by doing some card making I sort of put those pains our of mind for awhile. So I consider this good pain management for me. So my hobby is good for more than just being creative. LOL

Well, thanks for looking and hope to see you around more this week. I still have a lot of Christmas cards to make so no doubt will be blogging later on.

Great idea to use that sketch as a candy stripe background! With your color choices, I can smell the peppermint all the way down in Florida! Beautiful poinsettia, too, Verna. Hugs, de

WELCOME! Good to see you playing along in the challenge -- good luck for the prize~ LOVE your stripes It is my thing after all :)

Beautiful take on the challenge.

Your card is gorgeous. I love everything about it.

Oh I love what you did with that Sketch--perfect! And those poinsettias are gorgeous. Fabulous card!

Beautiful card, and great take on the challenge. I love that poinsettia and the way you colored it. Well done!!!

This is just so fantastic! I love your take on the sketch and using the Poinsettia too! Beautiful card. Thank you so much for joining us at IBSIC. Big hugs, Joanna

Oh what a fun and festive card. Nothing says Christmas like a gorgeous poinsettia.
hugs Asha

This is absolutely gorgeous! I LOVE the way you colored this image--and the peal embellishments are so pretty--reminds me of snow! Thank you for joining us at Inspired By Stamping! HUGS! :) Mynn xx

Verna, Your card is bright and beautiful. I love your take on the sketch. Thanks for joining us over at Inspired By Stamping. Hugs Jo IBS DT