Since I had so much fun doing my first try at the Kiss Cut Glittering technique I decided I had to try it again. To see the video on how to do it check my first post here: Glittered Perky Poppy. 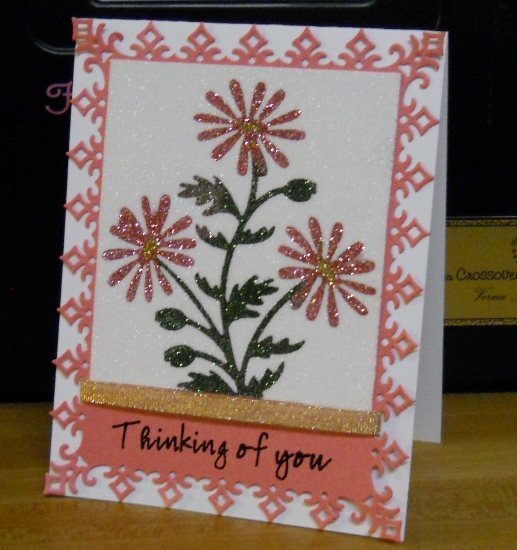 I used for inspiration the colors taken from this photo at the Die-Namites Challenge. I went with a more pinkish color then the photo but I still think it was close enough to qualify because it was a lighter shade of red. 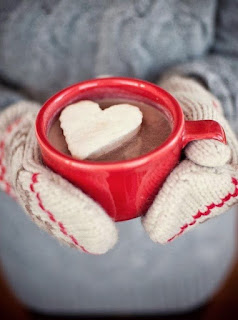 The Die-Namites die I used was one of my favorites as I am a lover of daisies. I seem to gravitate to them a lot it seems no matter if they are dies or stamps. This die is called Daisy Bunch.

I also used a new stacker die I recently purchased from Cheery Lynn Designs called Royal
Scandinavian Boutique Stacker to make the pink layer panel for the card using some shimmery pink card stock that I got from Crafter's Companion. My glitters were from Sparkle N Sprinkle. The sentiment is from the Gina K. Designs set called Stippled Nature and it is illustrated by Beth Silaika.

I started to remove the leaves and stems first using a Tim Holtz tool with a point on it to lift them up and when I got to the blooms on the daisy image I cut off the stem and left the blooms still adhered to the sticker paper. After I had burnished the green glitter into the stems and removed the excess glitter with a Swiffer cloth, I then proceeded to remove the blooms but left the centers of the daisies still intact. Once the pinkish glitter was added and the residue removed I then removed the centers and added some gold glitter. Again I removed the excess glitter. The last step was to remove all of the leftover sticker paper around the daisy bunch and apply the white glitter and again rubbing it in well before I removed the residue. This then made the design ready to apply to the rest of the card.

Oh, also here is a tip for you if you try this technique. I tried to use gold glitter around a floral image to do this technique and the darker color seemed to overshadow the main focal image of flowers. So I recommend sticking to a white glitter to do the background for the flowers. I will show you a small photo of the card I made trying the gold and you can see for yourself that it does not stand out as well. In fact I had a tough time to get the photo to even show the roses.  I also used a Die-Namites die for this one called Rose Bush. It is another lovely die design. 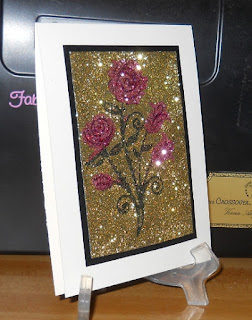 This card I made today will be sent to a friend who is need of encouragement as she recently was widowed and she herself is very ill. I thought the pretty daisy bouquet was just the ticket to bring some joy to her life and maybe perk her up a bit.

Thanks for stopping in again and I look forward to seeing all your wonderful comments too!

Another beauty! I see you're having a lot of fun with this! You're friend will love it.

Oh my goodness! So glittery and sparkly and beautiful!!! I LOVE them both, thanks for sharing!!! Just stunning! And I can just imagine the mess....lol. But oh, so worth it!

I will have to try this technique. Your cards are awesome!

Beautiful and super sparkly! Love it!

I'm sorry to know your friend lost her husband and she is sick. This sparkly flower card is sure to bring her a cheerful smile and warm her heart. You are a special friend! And thank you for showing us the gold background card. It looks cosmic gorgeous!!!

Absolutely gorgeous Verna. Love the sparkle on both those beautiful cards.

A beautiful card for your friend, Verna. She will treasure it. HAPY NEW YEAR, friend! May all your dreams and desires come true in 2016.
x Asha

What a beautiful and sparkly outcome on this card. Stunning! So sorry to hear the your friend lost her husband. You are so kind to think of her.

Nice card for the occasion, because as you know having been there dreary cards are the last thing wanted. Thanks for showing the difference with the gold, will save many a mistake.

Whoa! These are so stunning with the glitter use!!

Like these cards and love how you used the glitter on them. Perfect for the flowers you used.

And she did love it!!! Thanks for making this for her.

Very pretty. What a lovely technique and thanks for al the tips. Hugz