I found a Cheery Lynn Doily die that I had not used before. It was one that has a wing with it and so I decided this was a good time to use it. I am still working on St. Patrick's Day cards so I am once again going "green". 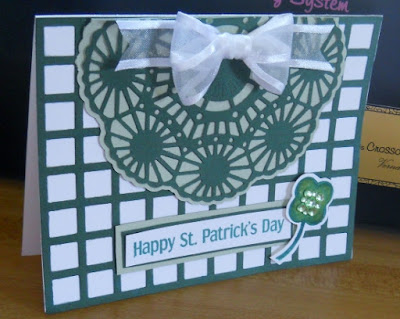 And I used the sentiment and four leaf clover images from the Clover set by CAS-UAL FRIDAYS stamps. The four leaf clover was stamped with green and then colored in with Spectrum Noir Aqua pens and fussy cut out. Then in the center I placed some light green rhinestone gems for more texture.

The background die facer was cut out with a duplex green card stock and I used the darker colored side and placed it over the white card base. Next I cut the doily out but since it was so large I cut a portion of it off and layered it on the wing that was cut out of the same duplex card stock but instead I used the lighter color.

My sentiment was also stamped in green ink on white card stock and the layered to both colors of the duplex papers. After that was done I then popped the four leaf cover over the end of it. The last addition to the card was the double bow ribbon of white satin trimmed chiffon. 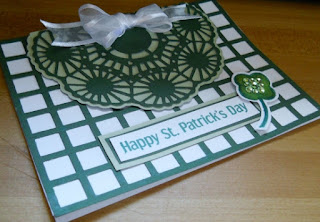 This will be my last entry into the NBUS #6 contest at Darnell Knauss's blog. She is always inspiring
me to use those things "I loved and had to have" but still had not used. Thanks so much for that push in the right direction Darnell. 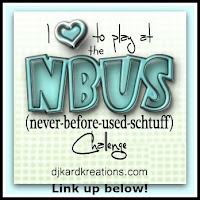 I am also entering this in the following challenges:
Cheery Lynn Designs Challenge #22-Doilies Theme
Scrapy Land Challenge-#37 Anything Goes

Oh, and my leg wound is considered healed now. So I don't have to go back for three months unless something changes in the meantime. I am really happy about that good news! I hope all of you will have a great weekend. Thanks for stopping by too!

Love your Saint Patrick's Day card! That die is gorgeous and it looks perfect for a Saint Patty's card! Thanks for playing along with us at Scrapy Land Challenges!

Love all of your green, that sweet little shamrock and that gorgeous doily die....pretty!!!

Great use of the doily setup for this one.
Good to see one used to see the actual size.
Glad your leg is healed properly now

Before I forget, I loved your green chicken card, Verna!! This St. Patty card is also fabulous! I'm so pleased to hear that your leg is healed at long last! Whoop!! You're very welcome for the push! (Wait, is that how you hurt your leg!) And thank you, too, for playing in my NBUS Challenge #6 three times!! Keep on using that NBUS! Hugs, Darnell

Verna, sorry that I haven't visited in a while. I have been sidetracked. LOL Love this St. Patty's card. Great use of the dies and I especially like that doily die. Have a great week.

Wow! I don't recall that doily, and it certainly is striking and looks very much like the doilies in one of my great aunts' homes. I was always dazzled by doilies because we did not have them in our home, and my mom would not let us touch them in our Great Aunts' homes. When great-grandma died, I was given all her old doilies that had tears in them. I still have many of them to use in my crafting projects! LOL

Thanks for sharing with us at the {Scrapy Land Challenge}! Hope to see your pretty projects again soon!
crafty hugs,
de
{Creative Smiles}

Super nice card, and that's a lovely doily die. You should use it more...lol. I love your colors and design.

Great design,Verna.Love how the background die and doily die work together.

Wow love that doily you have used here on you lovely card! Thank you so much for playing with us at the Cheery Lynn Designs blog and the best of luck hugs Amy xox

Great St Patricks day card. I do like that doily. Thanks for joining the Cheery Lynn Designs challenge. Best of luck to you.

Another super design for St Patrick's Day Verna. Thanks for joining in the challenge at Cheery Lynn Designs and good luck.
Julie x

What a wonderful St Patrick's Day card Verna and such a beautiful doily! Thanks so much for participating in the Cheery Lynn Designs Challenge this week and good luck.