Today I am using more Never Before Used Schtuff. I pulled out a stamp set from Sparkle N Sprinkle called Chicken Run Stamp Set 761 which I fell in love with but never had used and also found some pattern paper that was a Christmas gift several years ago which had not been opened either. So today was the day to get the stamps inky and use the paper. And, since it will soon be St. Patrick's Day I thought all my family should be dressed in green except for a little pop of red. 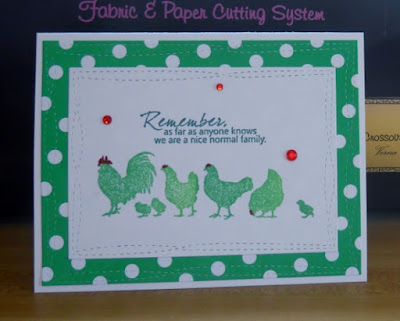 My solid silhouette chicken family was inked with a Marvy rainbow pad of green hues and stamped onto white card stock. I added just a touch of red to the older family members on their combs. The sentiment from the set was stamped in Gina K. Designs Christmas Pine. I then took a Die-Namics die set called Wonky Stitches Rectangle Stackers MFT 839 to cut out the white stamped panel as well as the polka dot green pattern paper layer. They were then placed on a base card of white. I added a strip of pattern paper inside the card too so that the inside and outside were connected. The last step was to add some red rhinestones. 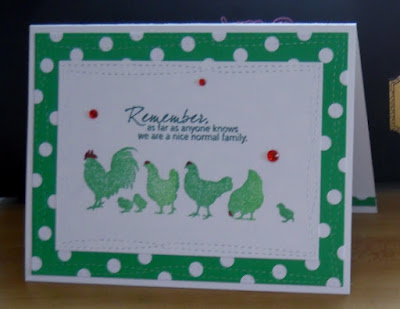 I got my inspiration for the colors from this photo which is shown in the Double D Blog challenge for this week. Therefore, this will be entered into their challenge contest. 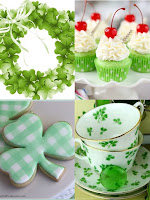 I am also adding my card to the NBUS challenge which is sponsored by Darnell Knauss.

And the final challenge this will be entered into is the Mod Squad Blog Challenge which is once again using animals which also includes birds. So this will qualify for that also.

I was always waiting for the right time to use that set of chicken stamps and I think this was a perfect opportunity for that. Here is another photo taken from a different angle. 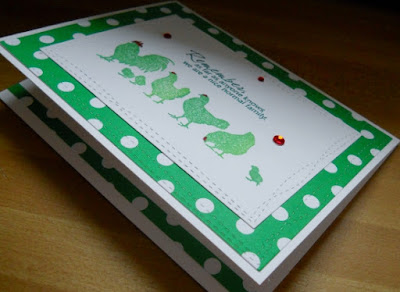 Well, I might be doing more cards later this week but tomorrow I have a checkup for my leg. As far as I know it is still healed so hopefully, the doctor will agree with me. So if I am quiet and not commenting much on your creations that could be why as usually it is an all day affair.

Thanks for stopping by.

This is AWESOME Verna and we are so glad you've come to join us again! Those little touches of red really pop ... fabulous design! (FYI prize went postal today ... enjoy)
Thanks so much for joining in the fun at our Double D ‘Feeling GREEN’ Challenge! We hope you’ll come back often.

Cute card Verna. Love the green chickens. Thanks for taking the challenge with us at the Mod Squad Challenge.

Hahahahah! This card is hillarious and very clever of you to make in all in green. I am still laughing. What a Hoot. Thanks so much for playing along with us at The Mod Squad Challenge. Good luck, and hope to see you again.
Barbara, Challenge Host.

Laughing here! Great use of the stamp set, Verna! The sentiment is darling! Love your little pops of red bling! Hugs, de

Oh my gosh, this card just makes me smile - green chickens - WHAAAT? And that greeting is so great, also love the red bling. Really, really fun!!!

LOVE this card and those fun chickens just have to make you smile!! Thank you for joining our 'Feeling Green' challenge at Double D!
Diane DD DT

Oh this is a fabulous card! Thanks so much for playing along at Double D challenge!!

Haha! Love the sentiment, and the way the little family is stamped all ombre-ish looks rad! I love that little red comb :)
Very aesthetically appealing card!

Such a fun card! Goes perfectly with ANY family occasion :-)

HAHAHA Love it....we all say that from time to time don't we? Great card, love the design and layout!

Hysterical!!! I love your chickens (like our yard!) And the sentiment is perfect!!! We quit trying to convince people we were normal because it was too obvious just how nuts all of us are lol!!!!

Cute card and awesome sentiment! I love it.