Yes, it is that time again for the winter drive for Cards for Little Hearts. I have been making cards for the drive for the last three weeks off and on. But when I cut my thumb I had to quit for a spell until it healed more. So I was so happy when a wonderful lady, Kay Barnes of White Rose Crafts said she would donate sheets of stickers to help with the card making process. I am so grateful to her and so I am going to start sharing some of the cards I made using some of them. Not all of the cards used stickers though. I hope the children will like them as well. I won't be stating who makes the images or what brand of stickers were used but if you wish to know something just let me know. 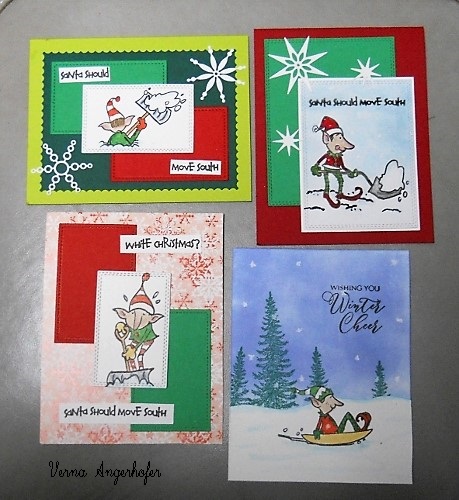 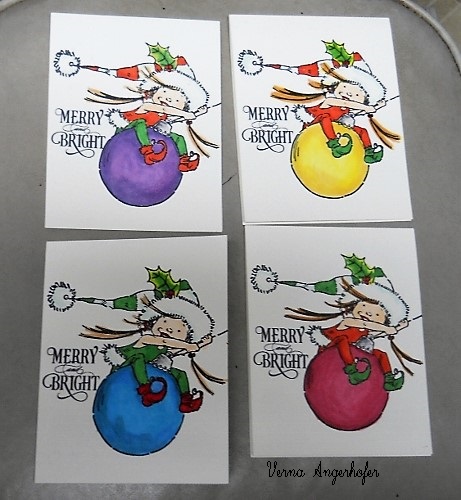 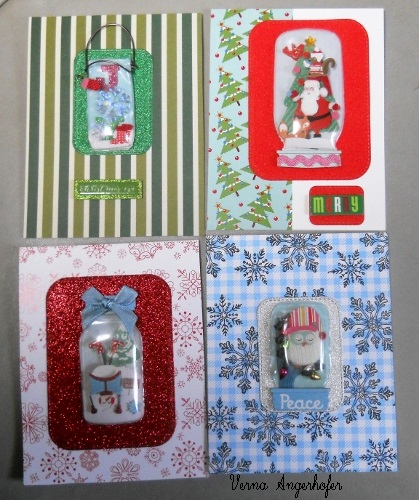 I will post more designs in future posts. And, if you want to make some cards for the drive be sure to check out all the rules and regulations for the winter drive which is ongoing now until November 1st.
I wanted to get mine done and mailed off because I am going to be busy taking care of carrots.

All summer long my hubby said that we had a poor crop of carrots as so many of the seeds did not germinate. So I decided to give them as much time to grow as they could and when we got frost I thought we should use them. I wanted to make some soup so I told him to bring in about four carrots for it. So he certainly obliged. Below are the four carrots he brought in and I have them on a sheet of paper towel. They just fit on it except for the big one which went over the edges of the square sheet. 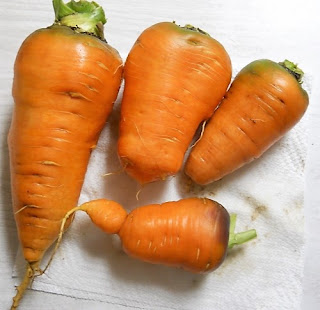 And I took a picture of him holding the biggest one. He was able to get his hands around it and we weighed it and it was 2 lbs. 4.4 oz. 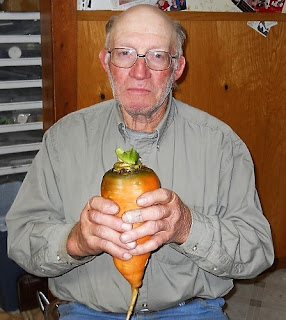 I think even though not many germinated that the good Lord was certainly in charge because if all the seeds had grown I would be even busier. As it is I am sure I will have plenty of carrots this year and no doubt will have some for our kids too. Today he brought in a 3 gallon pail filled with 12 carrots which I scrubbed up as they had lots of mud on them. And, tomorrow I will peel and cut them up so that I can blanch and freeze them. So if 12 carrots fills a pail I will have plenty. There should be 2 to 3 more pails in the garden.

Well, have a great weekend and I will be back another day to post some more of the Cards for Little Hearts.

The cards are cheerful and wonderful for kids. I do like the snow globe stickers!

Those carrots!!!? Who knew they could be so huge, really impresssive! You WILL be busy!

I'm glad you were able to make so many cards for a great cause! They're all so cute! WTG on those giant carrots! WOW! Those are amazing! You and your hubby have a super green thumb to be growing them!! WOW!

What a fabulous collection of cards.....Wow that carrot is a whopper.xxx

You have a very nice stash of Christmas cards for the children. Love your carrot story and the pictures are worth a thousand words.

Your cards are adorable. I love the sticker cards and that was so nice of her to send them. Now THAT is a carrot that your hubby is holding!! Never seen one like that in the grocery store. Glad your thumb is healing.

Cute for a cause! These are wonderful, Verna. The children will enjoy the happy and colorful images. And those carrots! Who needs many when they're this big? That last one -- wow!

These cards are just fabulous Verna. They are sure to delight every little heart of those receiving them. Bless you.

Such an array of wonderful cards! The kids will be delighted! That is one monster carrot - what's in your soil???? Very impressive!!!!

Another cute set of cards Verna, I especially love the little elf... I don't think I've ever seen such big carrots, did you happen to buy a certain huge variety? Carrot casserole sounds good right now. There is a restaurant that makes their own and when we lived near it we would stop by and get a container to take home. good stuff

Your Christmas cards are all very pretty. You have been a busy lady.

Wow, your husband has raised quite a carrot crop. Those carrots will taste real good in the winter when you are eating them in soup.