I have switched lanes for today's post and am working with some other things I had neglected since I had purchased them. As I stated before, I need lots of birthday cards so I made another one today with stamps from Penny Black. 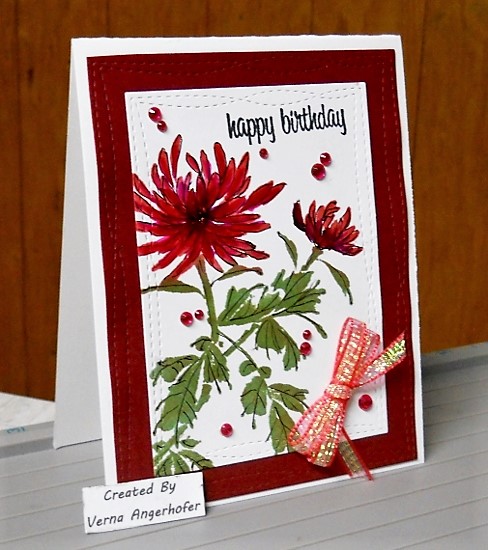 The first attempt I did was to use watercolors and that was a big failure. There was no way I was going to use that design the way it looked on a card. So my next time I used the small ink cubes from Gina K. Designs and did a direct to stamp inking with the help of my MISTI. I kept adding more colors until I thought I liked the way it looked. I also took the liberty of using a fine detail black pen to add some more of the details of the stamp that got lost in my repeated inking. The floral stamp from Penny Black is called Bejeweled and the sentiment is also from a Penny Black set called Special Wishes,

I used a Die-Namics Wonky Stitched Stackers die set for cutting out the focal image and the layer image. These were all added to a white card base. I finished the card by adding some rhinestones from my stash and a ribbon I just recently purchased from Sparkle N Sprinkle. It was supposed to be a type where you pull the string and it makes a cluster type decoration, but I removed the string and instead used it to make a ribbon bow. The string is a pretty color too, so I will save that for another project.

I am entering this in the Mod Squad Blog Challenge in which the requirement is to use bling.

Well, another week has sped by like crazy. I spent a good portion of the day getting a different TV lineup with my DISH set up so I was limited on crafting time. I also had laundry to catch up on as well.

I wish to thank all who come by and comment. I just love to see what you have to say. Everyone have a great evening and weekend too!

There is something about Penny Black stamps - they all look amazing coloured. What a beautiful job you have done here Verna.

This is beautiful! What great colors and I love the arrangement of all the jewels!

Stunning, simply stunning. Gorgeous, rich colors and great design. I love everything about this card!

I saw this card on FB and saw that you entered it on the MSC. So beautiful Verna! It looks like a watercolor and I am so glad that you got a better image with the repeated stamping. Donna and I are doing even and odd comments with week, and I was hoping that you would be one of my comments. Donna will be back and wanted to do her comments as soon as she could. I offered, but you know Donna, the over achiever. Good Luck and Thanks for joining us at the Mod Squad this week.
Barbara DT member

This is a beauty! I love the red and green..so sharp.Those wonky stitched rectangles are always so fun too!

Absolutely love it Verna, and put that stamp on my list. It just pops.

how pretty...love how this turned out. Don't feel bad, I have had many fails when it comes to playing with watercolor...I think all you can do is to keep trying.
xx Karen