What? You said what? This word in the title of my post was new to me but it was explained this way. It is the practice of concealing a file, message, image or video within another file, message, image or video. And, that was one technique I had to try. It was very difficult for me as I think I chose a die cut message that was to technically designed and I had to do a lot of inlaying on it. But none the less I did use that in this card and even though it doesn't look the greatest I will show you anyway. 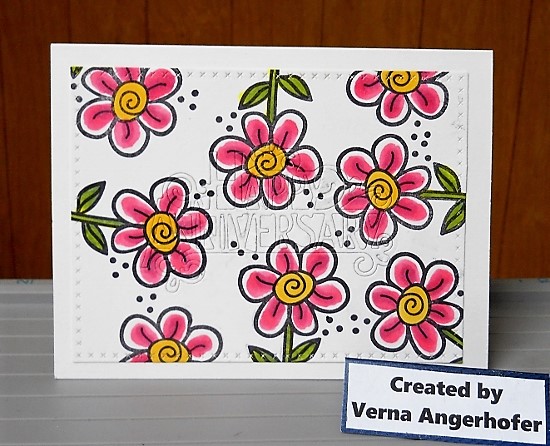 Not only did I used a new die but I also used a new stamp set that I had purchased and never put it to use. So this qualifies for Darnell's NBUS Challenge. The die is a Happy Anniversary one from Tonics  Studio and the stamp set is one from A Jillian Vance Design called Simply Said: Happy Daisy.

First I stamped my design repeatedly with Memento Tuxedo Black onto white card stock and then colored the design with my Copic markers.

Next I took a Memory Box Cross Stitched Frame Border die and made my layer from this stamped pattern paper. I was then ready to die cut the hidden Happy Anniversary verse. Now since this required so much inlaid pieces I decided against doing another layer underneath. It would have involved too much piecing but I still think it works for a hidden design.

Much of South Dakota is getting snow but so far we have not gotten any. Maybe later on tonight.  We might wake up to 2-4 inches they said.

Well, another day gone by again. It seems I mostly only get one card done each day. Always other things to occupy my time. But I guess even so, better to go at a snail pace then rush and not get as good a work.

Thanks for stopping by. I love your comments.

This is stellar! ... and if you are getting that many card done you don't need to worry like the rest of us! Such a fun layout! Thanks for sharing!

One card a day works like an apple a day. Keeps you busy and active. I love your hidden message and the fun flowers on this card.

How creative and such a fun idea Verna!One card a day is a great idea,thats a good way to keep up!

This is really cool, Verna. I don't really understand how you did the die cut, though. Did you die cut it and then piece all of it back together?

Those daisies are just lovely, Verna ... the die cut greeting is camouflaged beautifully ... and the cross stitched edges are fabulous! So very pretty! Thanks so much for coming by, and for your sweet words! Anita :)

How very cool. I have never seen this before and it's very intriguing. I love your design and our pretty flowers, well done!!!

Very neat idea. And a Card a day. Have not done that for a few years, and know what it takes to get it done and posted. Love it. TFS

I just love how you embraced the stenography, Verna! And I think you did a brilliant job hiding your message in your pretty little flowers!! Gosh, if you are getting a card done every day, you are rocking this hobby! I'm happy if I get two done a week any more. Hope you aren't buried in snow by now! Thank you so much for playing in my NBUS Challenge #9 and joining in the optional theme!! And thank you for your kind comments and get well wishes!! Hugs, Darnell