Today I made a slimline card to enter into Jan's Digital September 2020-Anything Goes Challenge. I used images from two stamp sets of Jan's called Tree Scene Set and Winter Deer Set. 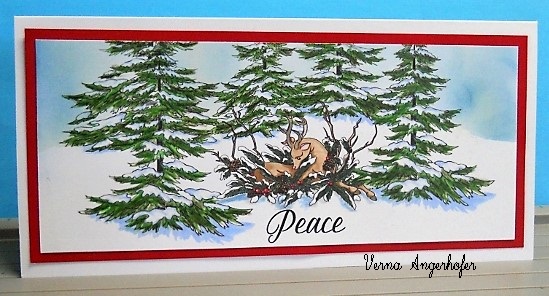 The images came pre-colored but I added additional color to the trees and then also brushed on some blue ink from Memento to create a skyline on the card. The shadow on the deer portion was more of a gray so I also added some blue color to match the shadows below the trees. The extra color was added with Prismacolor pencils. The sentiment is also from one of those sets. I then layered it to red card stock before adding it again to a white card base.

I still am not sure how to adjust things properly in a scene like this. As you see I had to cut off the tops of some of the trees. But it still makes for a nice scene.

Well, we dropped from 80 degrees on Sunday to the forties overnight on Monday. And, last night we were in the thirties and that is predicted tonight as well with it dropping down to possibly freezing. It is no wonder my joints ache. Hahaa! I also got the beets frozen this week too and hubby is covering up the tomatoes so they don't freeze. We got them in late and of course, that means they ripened late too. We only planted four plants this year.

Our grandson is out of quarantine since Labor Day. He is happy about that. I hope he doesn't develop any after symptoms now. But I guess the Lord is in charge of what happens next for all of us.

Well, take care everyone. Stay safe and well. My prayers go to all in those fires in California too and those who suffered damage from hurricanes and tornadoes.

What a wonderful Winter scene and the shadow effect looks great Verna x. Sorry to hear about your aching joints and wow to the weather/temperature drop x. Sending positive thoughts about your grandson x.

Verna, your card is gorgeous. The scene turned out beautiful, IMHO. Well sounds like the weather has a mind of its own. Hope you get all your veggies in before they are ruined. Stay safe and be well.

This looks pretty turned on it's slimline side! Love the scene!

Beautiful beautiful scene on your slimline and I think the trees look fabulous!!

I love your peaceful scene. You are very creative and adding the blue makes it look like the cold weather that you are experiencing. We too have cold weather and I hope it doesn't hurt the crops. There are many things to pray about this year of 2020. Hugs!

Your scene is so peaceful and beautiful. You did a great job arranging your images. I think the trees look great and very natural with them positioned off the page; that's exactly what I'd see if I were focusing on a deer among large trees. Great job adding color to make all your images fit together nicely. Glad to hear your grandson is doing well! Wow, 80's to 30's - that's a big jump!! What happened to fall?!

Great job on this Verna. Love the two scenes together. Awesome sponging for the sky too!

This is so lovely and peaceful. And on top of that, you made it slimline. Gorgeous card, I LOVE it!!!!

What a pretty scene! The red layer really sets it off. Glad to hear that your grandson is doing well. Hope your tomatoes survive the low temperatures. It's too soon to worry about frost!

We have a 80,000 acre fire here (an hour or so away), so it's smoky but lots of fires around our state and others. We just got a "federal" warning that the weather is bringing smoke from CA and OR into our area tomorrow, so a "stay inside" warning -- which means only those of us that HAVE to work will be out.

Verna, your card is beautiful and you made such good use of mixing Jan's sets!!! You keep this up and we're going to have to put you on the Design Team! I love how you do this on a slimline card and I think it looks so pretty how the focus is on the deer hidden among the trees in the snow! So glad you shared this with us at Jan's Digi Stamps Challenge. We always enjoy your entries!
~Karen Page, DT member for Jan's Digi Stamps Challenge
Blog: MisplacedMojo.com IG: @misplacedmojo

What a beautiful scene, Verna! You’ve become a digital master with the Digi resizing, combining, and papers! It’s a wonderful skinny design!

Gorgeous card Verna, loving the slimline cards.... great use of the digis and adding a little extra texture and color is such a great idea

Your card is beautiful. I love, love love the beautiful sky.

Your combined digi sets are beautifully enhanced by your special touches. I really like the snow and sky line. Fires in Oregon are destroying much of the state, not to mention whole towns and lives. Smoke is everywhere and even here on the coast we have smoke and ash. It's good news that your grandson is out of quarantine. It's hard for young people, but very important to be safe.

Love this, Verna! I have this image but I haven't used mine yet - thank you for the gorgeous inspiration!

Wow! This scene is so pretty!

another beauty!! I love how you add those little touches even when you use something pre colored... it really makes a difference... gorgeous card!