I get so much enjoyment working with dies of late that when the challenge this week at the Cherry Lynn Designs Blog had the theme Anything Goes, I decided it was a good opportunity to make another Mother's Day card. After all, I have two daughters and a daughter-in-law who are mothers to my lovely grandchildren. So I like to remember them with a card made especially for them. 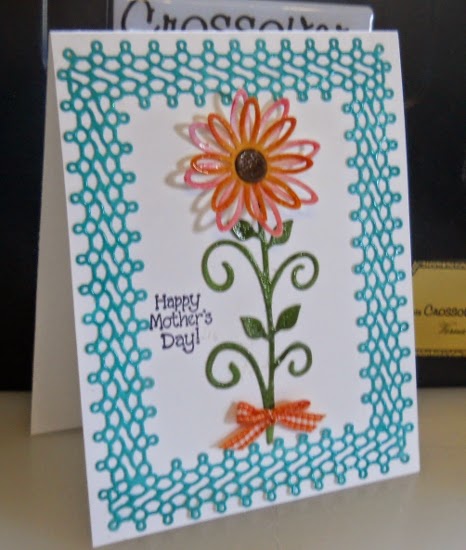 For this card I used the Japanese Lace & Flourish Frame. I cut it out twice. Once in the green so the leafy flourishes would be that color and again in the blue so I had that pretty frame. The flowers I used on the card are from the Manon's Wedding Garland. I only used the flowers and kept the garland frame for another project.

With the frame, the flowers and the leaves I also sponged on extra color to give the die cuts more dimension. Then I inked them up with Versamark ink and heat embossed them with clear embossing powder. This not only made them shimmer but also gave more body to the die cuts.

All were adhered to the white card front with glue and the card was finished by stamping the sentiment in black ink. The sentiment is an old one which is quite small but worked perfectly to place on the card front. It is from Oglund's Gingerbread House which was a former South Dakota company which is now out of business. My final embellishment was the tiny bow which I made with my Craft-Dee BowZ bow making tool.

We have a sunny day now after a few sprinkles overnight. We had hoped for more moisture but I guess when the time is right the Lord will provide. Meanwhile, we are enjoying the warmth of the sun.

Thanks for stopping by and hope your day is going well too!

Love that pretty frame and your beautiful flower!

Oh wow, what an interesting frame - have never seen that before. And your flower is gorgeous!! LOVE it!

Gorgeous card. Love that frame and the flower. Must have another look at those dies. Hugz

Your card is lovely! Beautiful dies and great colors!!

Here is hoping for more rain to come your way, Miss Verna! In the meantime, you are "raining us with gorgeous artwork" - I am enjoying your diversity of styles and techniques. This is a darling card, and perfect for mother's day! hugs, de

I simply adore this card! You used my favorite colors and the way you created your flower is just gorgeous!!! And I love that frame, too! Thank you so much for playing along with us at this week's Cheery Lynn Designs challenge!

What a lovely card, Verna. Love the colors on that pretty flower.

Fabulous use of dies!

How lacy and lovely! I bet these dies were so much fun to use. And you're so great to remember your grandkid's mommies!

What a lovely card, Verna. Adding the embossing powder to the dies really gives a cool effect! Good luck and thanks for joining in on the fun at Cheery Lynn Designs challenge.

Great technique on your flower! Thanks for joining us in the challenge at Cheery Lynn Designs!

How lovely to make Mothers day cards for your daughters!They will be delighted!