Foiling was the second challenge at Stamp TV for World Card Making Day and I was not sure it would be something I would be able to do as I did not have a printer or a heat source that would work for it. But I had to try. 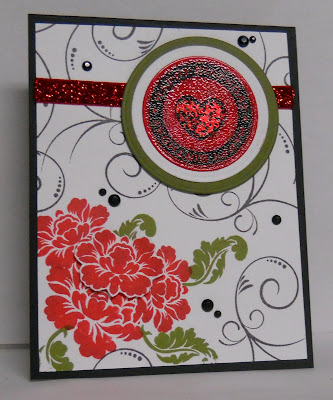 I used a pre-printed sentiment design with a heart on it that was supposed to work with foiling that came in a Stamp TV kit. So since I had picked up a small sample of 3 x 3 inch pieces of foiling tissue in the bargain bin I thought I would first try it with an iron. Well, that failed as it scorched the paper but did not add the foil to the black portions of the design.

My next attempt was to try a glue pen and I did not let the glue dry long enough so that ruined another one. But I thought it through and decided to retry this method and let the glue dry longer and then try and rub the foil onto the glued area. This time I only added glue to the heart portion and while I did the dishes and a few other things it was drying. It did work much better and at least most of the heart was covered. So I took a black fine point Bic marker and filled in the areas with black ink to give the heart a more mottled look. But I feared that since this was only a temporary gluing that it might come off again, so I took a Versamark clear ink pad and went all over the circle medallion and added clear embossing powder to give another coat of reassurance to it. LOL 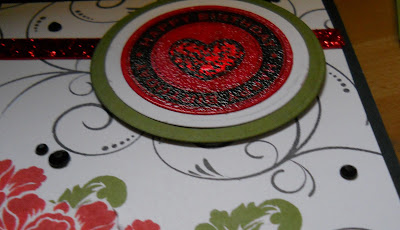 I used the stamps from the Gina K. Designs Made With Love set. And I used Gina K. Design dye inks for all of the stamped images. In case you have issues reading the sentiment it says Happy Birthday all around the circle. I added a red glitter ribbon over the panel and over that mounted the foiled circle which I also layered to white and then to green card stock. And my base card was black. The final touch was to add some black rhinestones to the designed panel. 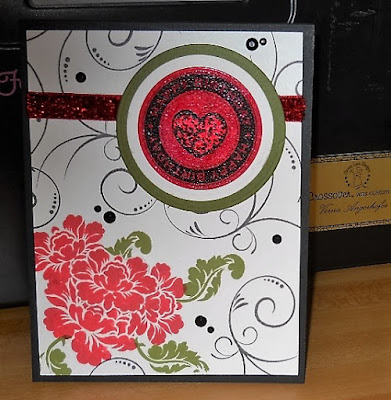 I tell you not only did this card take me a long time as I had to work so much with getting that wee bit of foiling added, but also taking a photo of foiled images was a pain too! I think I took over 25 photos and these were the best of the lot. By the time I got the photos chosen I was very much out of the mood for any more card making that night.

Well, I will show more of my World Card Making Day cards in future posts. It was a challenge I did enjoy but  this I think was the most challenging one for me to do. Thanks for stopping in and I hope to see you again tomorrow. With rainy days one never knows if the internet will work right or not but if it does I will be back. Have a great day!

Good for you using what you had to try this challenge!

A lovely card, well worth the time you spent on it. xx

Sorry you had so much trouble with this, but glad that you did not give up. This is lovely.