This was the third challenge at Stamp TV for World Card Making Day. A non-traditional Christmas card was to be the theme. I found this one to be the most easy for me to do too. I went with a single layer card but tried to make it look like there was a lot going on in the scene. 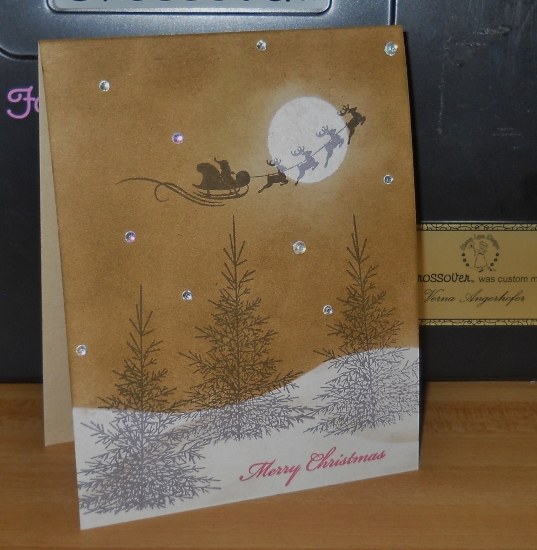 I started with a kraft card stock base. And, I first made a circle mask and used the negative to place over the area where I wanted the moon and then sponged that in with Gina K. Designs Ivory pigment ink. When that was done I placed the positive over the top of the moon so that I could sponge around it with Gina K. Designs Kraft and Warm Cocoa dye inks. I also made a mask to make the snow line and on the bottom I sponged on more Ivory ink.

I now had the basics done for the scene and only had to add in the filler stamps. I chose to add the Santa and Reindeer image  with Dark Chocolate dye ink and show them flying over the moon. Next I took the tree image from the Gina K. Designs Christmas Wishes set and stamped that three times also in Dark Chocolate. The sentiment from that set was also used and to kick it up a notch I stamped that in Gina K. Designs Red Velvet ink.

The final touch to the card was to add some clear rhinestone gems to make it look like some stars in the sky to go with that nice round moon.

This was such a relaxing card to make. I always enjoy sponging and find it to be very therapeutic in fact. I hope you like my non-traditional Christmas card.

Have a great day!

Oh Verna this card certainly has a WOW! factor to it. Simply fabulous. Love the scene you created here.

Your card is beautiful

I love Santa flying across the moon on a star studded night. Nice one layer.

Oh wow, this is fabulous. LOVE how you have treated this challenge, that moon with the Santa flying in front of it is awesome!!! Great card!

Wow, this is stunning! Love it.