I sneaked in a bit of card making today as there were a couple of challenges I wanted join in on and this card I made fits both of those challenges. I made it a Winter themed card. And what says winter better than an ice skating snowman and some snow. 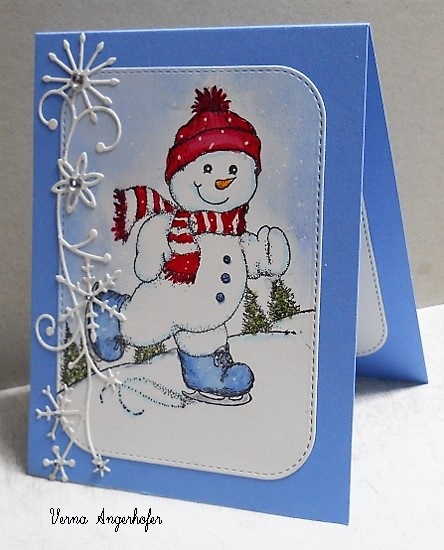 The snowman image is from Heartfelt Creations and is from the Frolicking Frosty stamp set. After the scene was colored I cut it out with a My Favorite Things Die-Namics die from the Stitched Rounded Rectangle Stacker set. The outer snowflake die was cut with a Memory Box die called Frosty Border. After adding this design to a blue card base I then added some rhinestones to the die cut snowflake border and also used a white paint pen to add some snowflakes to the scene too. The card was finished by adding another white die cut panel inside the card.

I am adding this card to the following challenges:
Mod Squad Blog Challenge
Double D's Challenge

Well, I got an early Christmas gift in the mail. I got a post card in the mail saying that I was released from jury duty. I was so worried as I know all my health issues would make it very difficult for me to serve. And, the worst part was it was not local and I would have to drive and stay overnight. Or should I say my hubby would drive me as I seldom drive in winter and especially in a strange city. Not that I was not capable mentally to serve but physically it was not in the cards. I wish they had asked me when I was young and not waited until I was so old and decrepit. So I think I will be sleeping much better from now on. This was an answer to my prayers. The Lord did not let me down but then I knew he would help me through whatever happened.

Well, time to think about what to fix for supper. I hope your week is going great and thanks for all your visits and wonderful comments.

Verna, this is adorable! I love your snowman and the whole scene is just perfect! Thanks so much for playing along with us at  The Mod Squad Challenge Angie, Challenge Host.

Darling image & so beautifully colored! We just found out that our county excuses you if you're 70 or older, if you want. That's what my hubby did. Glad you were released.

Your ice skating snowman is just darling Verna! That die cut snowflake embellishment is delightful! Merry Christmas to you and your family.

A super little card Verna! Love the image, the colors and the snow flurry! Perfect winter card. Glad you were released from Jury duty. Have a wonderful Christmas season!

Verna, I love your snowy skating snowman. He is just too adorable. That blue background really sets him off. I got a survey to fill out just before we came to Florida. If called for jury duty, it will be my 6th time. I thought five was enough. Mery Christmas, my friend.

He is sooooo HAPPY! I adore that image, especially paired with that beautiful snow flurry die cut! Thanks so much for playing along with us at The Double D Challenge Blog, Baby It's Cold Outside (WINTER), Donna, DT Member. Merry Merry!

What a wonderful wintry card with that cute snowman and die-cut border! Like you, I got a notice to serve for jury duty as well. I think I'm mentally capable, but also physically unable and definitely unable to drive into Philadelphia!! I hope I will be excused, but I've asked myself the same question for a while - why wasn't I called to serve when I was able and willing for so many years? Who knows! Glad your prayers were answered.

Well how stinkin' cute!!! This card is just adorable, and I love that die cut embellie on the side. Glad you could find time to play along with us over at Double D. And congrats on the jury duty thing. You have been vindicated....ha ha!!!!

Oh Verna he is so, so cute! Wonderful creation my friend! Merry Christmas to you & yours! Thanks so much for joining in the fun at our Double D ‘Baby It’s Cold Outside (winter)’ challenge! We hope you’ll come back often.

Fabulous card, my favorite snowman! Love how you used the diecut and your great scene

Love the use of the border over the image. Actually just plain love that border. Wonder job on the coloring.

He's gorgeous Verna. So to your card. So colourful and your die on the side finished this of beautifully. Merry Christmas.

Thank you again for my beautiful card Verna! Have a blessed celebration and a Happy New Year!!

Your snowman is very jolly! I am glad you won’t have to travel in winter weather for jury duty! I have been called frequently, and cancelled at the last minute each time. So I don’t get credit for any of those.

Such a cute snowman. The snow flakes on the side are a perfect touch.

So adorable! Love the colors you used and your beautiful coloring. That snowflake border was the perfect touch! And congrats for things going your way! Hope it's put your mind at ease!