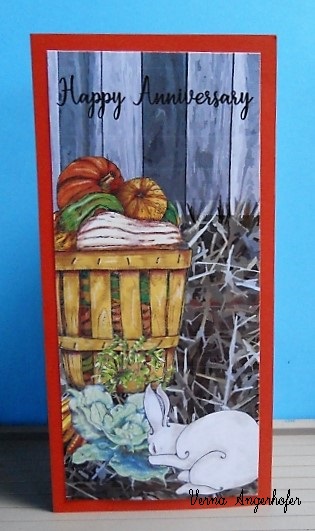 Well until next time take care and God bless,
Verna
at September 04, 2020

Verna, this is awesome! The image is beautiful, and your coloring is amazing! Thank you for sharing! Will continue to pray for your grandson! Hugs...

I love this slimline card with all of the cute details! I'm so glad to hear that your grandson is improving and will continue praying for him.

Brilliant the way you put this together to make such an inviting scene. I'm glad to hear your grandson is feeling a little better and I hope he'll soon be back to normal. It's hard to distance, but necessary if you want to be safe. Life has changed for us, but we are managing ways to be active and socialize safely. I don't know if we're ever really safe, but doing the best we can.

Simply beautiful Verna. Sorry I haven't commented for a long time. Still trying to get more time to craft and comment and starting to do a bit more from time to time.

This is beautiful! You did a fantastic job arranging your images, and the coloring you added to the grass and cabbage looks great! Glad to hear your grandson is improving and will continue to pray for his full and speedy recovery.

Beautiful card, Verna, with a lovely image.
I've just read your post saying that your grandson has contracted Covid-19. Wishing him a speedy recovery. xx

Gorgeous card as always love the layout and images ...sending get well wishes to your grandson it’s such a worrying time stay safe x

What a cute and fun slimline card! Gotta love that bunny feasting on cabbage :)

I love the new Williamsburg Memories backgrounds. Love the Harvest Bunny set against the wood background. Thanks for sharing! kReN on the DT

You may have had to ct some off, but you got all of the important things on the card. Glad to hear that your grandson is improving. Our granddaughter and her three roommates all tested positive, but none have any symptoms. Have a safe weekend. We wiil just go out for a drive.

Hi, Verna! I can almost smell the harvest leaves and hay, and the fresh air and autumnal squashes. Your combination of digitals looks just like a framed scene! Does your farm look like this, too? It's lovely. hugs, de

You did a great job of fitting all these lovely digis on to the card, Verna. I wouldn't know where to begin! Glad to hear your grandson is improving - continued prayers!

Great job using all the different images for your card. It looks so cozy and fallish. I'm so glad to hear your grandson is doing so much better. This is such a scary time to be out and the schools are all having cases rise. Sounds like he is on the mend.

Very pretty scene, so peaceful, and your "trim" didn't hurt a thing!

Oh no! I will find out about your grandson as I go back I guess... I love this card! It's so pretty and the images all go together perfectly. Love your little adds too... I think they made a big difference!

Perfect images for a Fall anniversary card, Verna! Glad to hear your grandson is improving!

How fun, Verna. I really have not gotten into diji's, but you sure make beautiful cards with them.

What a beautiful scene you have created! So very pretty!

Such a sweet harvest card Verna, we have been enjoying the bunnies in the back yard