Well, here we are again with this awesome challenge to make use of never-before-used schtuff! And, for all the rules check them out HERE. I did this last year and it was a good way to use some things old that never had seen any creativity with them.

Below is the card I created and everything on it except for the black ink and light blue Spellbinder oval die cut are all NBUS. I even tried a new technique which is to embed portions of the negatives of a die cut into the original die frame design. Even the duplex card stock I used for the base card is new and was never used. 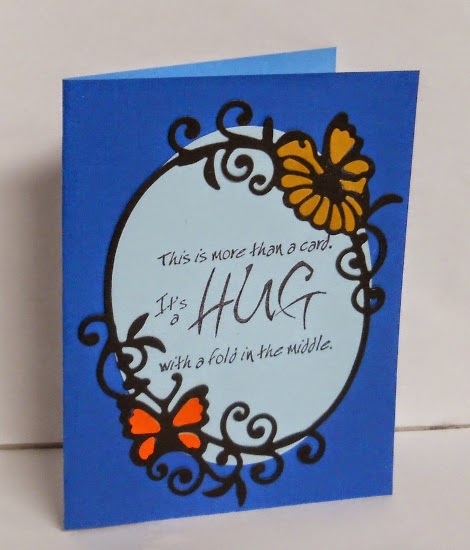 I used a Spellbinder oval die and over that I added the Die-Namites Butterfly Frame with a micro brush applicator dipped in Ranger Multi-Medium Matte glue, all three which I received from my hubby for Christmas. The sentiment from Verses I had purchased some time ago but never inked it before so that was my choice for this card.

Even though my oval die cut underneath the frame did not exactly match in size, I decided that I still liked it and would try to make it look like it was balanced on the areas where it did not quite fit. And, I am think it still looks great!

Now that was fun and I hope you get your NBUS out and do something creative with them as well.
Thanks for stopping by.

What a great card Verna! That sentiment is terrific! Hazel x

Oh Verna I love this card - so bright and colourful. Probably just what you need over there in the middle of winter. Love how the frame is off centre. Adds to the great effect. Fabulous sentiment too. Just all round fantastic.

I love the colors you chose for this card. Using the negatives to add color to the flower and butterfly looks awesome! Great card.

Love this idea and the card is so bright and springy with the butterfly and flower as well. Great for this season to brighten us up.

what a fabulous card, Verna! I love using things that are in my stash and just screaming to be used! This is one of those wow cards - beautifully inlaid! hugs, de

This is fabulous Verna and I love that technique you used with the leftover pieces.

So fun you are creating again - hope you enjoyed your break - Happy New Year! I like the die framework - looks terrific - and that sentiment is very fun

Thank you for saying such nice things and participating in my third NBUS Challenge, Verna! Picture me giving you a hug without a fold in the middle. I used to have a fold in my middle, but then the holidays happened! I do love that sediment so much and I think it is perfect for your pretty card! I agree with you that the design turned out just great the way it worked! And well done you with the inlaid die technique! Isn't it fun?! I think it's especially fun if you're a person who likes working jigsaw puzzles ~ which I used to do before I blogged, lol! Thanks, again! Hugs, Darnell

What a clever little sentiment. LOVE it. I want to play but my NBUS are so deep in my craft room I can hardly find them! :)
hugs, Asha

Bawhahahaha! What a great sentiment!
Made me roar with laughter! I love it!
Fabulous job with your "NBUS" LOL