I finally got back to some card making and so I made four Easter cards similar to this one. I used a digital image from the Church Sympathy set from Jan's Digitals. Instead of placing a sentiment inside the oval design I added a die cut cross from gold mirror card stock which was one of three in the set I got from Impression Obsession.  And the sentiments I added were from Gina K. Designs. 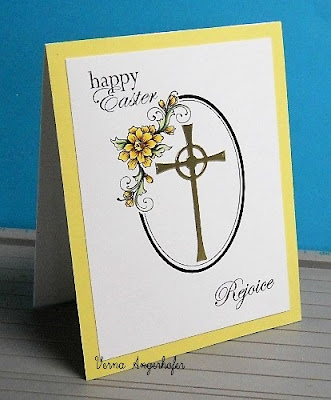 This time using that pre-colored digital oval design with the flowers I turned it upside down before adding the cross die. I like it that way too.

I am entering this in Jan's Digital Challenge #10-Anything Goes.

Now on a personal note: The reason I have been missing in action is that we had a pipe break under the kitchen sink. We had water in the kitchen area and also in the basement. So that meant shutting off water to those areas and trying to locate repairs for it. This called for a trip to town as we did not have the things on hand to fix it so hubby took a risk and sought out supplies to fix it. He worked two days on getting it done and it was a really hard job to do by oneself. He thought about getting a plumber but since he was home bound more he figured he could do it alone. And, he did but we still have one more issue. We do not have our drinking water reverse osmosis system working now so that means a repair guy will be coming later this week to work on that. But we have some bottled water we can drink and for cooking we are using the soft water. It will get us by.

So some cleaning got done whether we had planned on it or not. With so much water it took quite a bit of time. It leaked in the basement onto some old clothes saved for a lady who wanted to make rugs and also onto the tread mill. So that tread mill is unplugged and going to be allowed to dry out well before resuming use of it. We still have the bicycle to pedal at least which is not something that is plugged into electricity.

So just in case you wondered why I was missing in action that is the reason. I did manage to get several cards written and sent out though to people I thought would like to be encouraged and cheered during this health crisis. My sister is still in the hospital as her legs still are not working too well. She might go to a nursing home but then again she may just stay there because  there are the most cases of Covid-19 in their town in South Dakota. She is doing okay so far as that threat goes. We had hoped she would be going to her own home soon too. I feel that might be the best place for her.

Well, everyone stay healthy. I think I will get some bread flour out of the freezer and warm it up and try to bake some bread one of these days. I keep it in the freezer to keep it fresh longer. I just hope my yeast is still good enough to get it to rise. We might end up with hard tack bread like in the old west  days. Haha!

Beautiful card. I'm so sorry to hear about the plumbing problems. Oh, what a pain and an expense. Yes, it does take sometime like that to make you clean areas you wouldn't have thought of for quite awhile.

I hope your do get to bake some bread and it turns out good. I made biscuits today and they were fabulous. Not that we needed to eat them but oh they really were good. [Bunny]

What a bummer about the plumbing issues! Hubby's daughter is still working to get everything fixed after a big leak in their kitchen months ago. Love how you put the cross in that beautiful oval!

Verna, Your card is so gorgeous. Sorry to hear about you plumbing problems. Glad you were able to get the better part of the problem fixed. Take care of yourself and your dear hubby. This virus will pass in time. Hopefully sooner vs later.

Beautiful card, Verna! Elegant in its simplicity. Love it!

Your card is beautiful. I love the simplicity of it.

Sorry about your pipes, but happy your husband was able to fix them.

Your classic Easter card is beautiful, Verna! Love the yellow and pretty font! I'm so sorry to hear about the flooding you had from the broken pipe. I can just see you putting your hands on your hips for a sec, surveying the situation, and then calmly setting about doing what needs to be done! I'm sorry to hear about your sister. Let me know if you want me to send her a card. Please take care! Hugs, Darnell

What a trial you have had Verna - somewhat character building, on top of all the other 'stuff' going on!
Loving this card - it's so delicate and elegant!
Stay safe
Blessing
Maxine

Beautiful card! That gold cross looks great in the center of the oval design, and love how you positioned the two greetings in the corners.

Sorry to hear about your flooding issues. Hopefully there was little/no permanent damage from the water. Good luck with your bread!!

This is so lovely. I really like the yellow, very sweet. And the clean and simple design is perfect here.

Oh no! What a time to have to deal with this broken pipe and the mess it made. It's wonderful hubby was there and able to fix it. Hopefully you will have clean drinking water soon. That is a lovely Easter card and I like that design. I hope your sister is able to improve and go home soon. The nursing home is not a good place to be right now.

Sorry about the plumbing issues. It's good that you have a handy hubby that can fix things! I love your Easter card. It is so delicate. Putting the cross in the oval was a great idea! Take care of yourselves.

A beautiful Easter card x. I am so sorry to hear about your Sister and your horrendous leak. Stay positive and safe ....I am sending hugs and love x.

That oval would look beautiful whichever way you turned it. Love it with the cross inside as an Easter card. I'm so sorry about your water leak and all the extra work it caused. I hope everything turns out okay. It would be lovely if your sister was able to go home soon. Much better than staying in the hospital or a nursing home. She would be more comfortable at home, I'm sure, but only if her legs are working good. Keep your positive attitude, Verna. Hugs!

Verna, You have mastered the Digi manipulation.... GREAT EASTER CREATION! Your ears must have been burning because we were talking about you yesterday and wondering if you were OK!
Sorry to hear about the plumbing... Hope your sister gets better soon. Most of all, stay in, keep safe and wear your mask and gloves is you have to go out!
Hugs,
Jan
(Owner & Illustrator of Jan's Digi Stamp Shop)

Your card is just beautiful and such a lovely traditional creation for Easter. It seems when one thing goes, another thing goes, and I'm so sorry for your water pipe mishap. It's great that your hubby is able to fix it himself, and hopefully the water treatment system will be back in order soon too! Stay well, and I'm sorry your sister hasn't fully recovered yet, hopefully soon. Good luck with that bread! I haven't made bread in decades!

Oh my! You have got a lot going on! This is beautiful. I love how all of these different products are perfect together! I'm glad you are both doing ok right now and hoping you stay safe and healthy! (And you have no more home repair issues!).

What a beautiful Easter card! Sorry to hear about your pipes. I hope your sister is feeling better.

Your card is beautiful, and I adore the flowered oval around it! So glad you were able to fix most of the plumbing issues, and hope all else is fixed soon. Good news about your sister, and hope that her recovery continues and she can return home. Stay safe & healthy!

Perfect image for a beautiful Easter card. Hope your sister gets better soon!

Very pretty... Love the floral as part of the oval. Ohhh to eat bread...Oh how I miss me some good homemade bread... Even cowboy style... lol

Wow what a story. Glad you got it fixed. Your card is lovely...beautiful clean and simple!