Well, sometimes we make a card and just don't like how it turned out. That was the case with the card I showed you on the previous post using the D-Lites Gazebo image from Spellbinder. So I carefully removed the Gazebo and redid my scene with a new set of stamps. I think this is a better proportioned look and I am more satisfied. 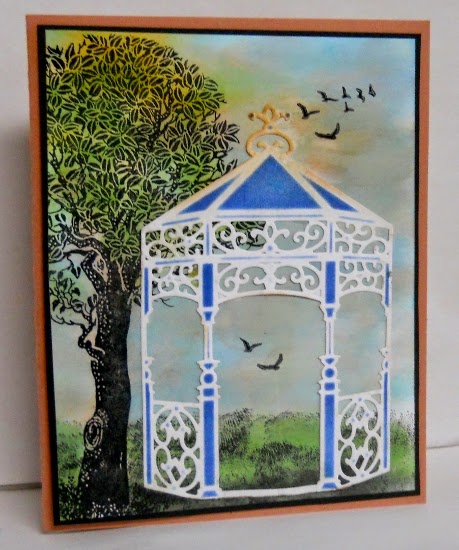 I remembered that I had a large tree image from A Stamp in the Hand from year's back when I first got started into stamping. I was so tickled when it still produced a good image. Sometimes old stamps sort of die from old age but this one worked fine yet. So I began my new scene with that tree off to the left of the scene.

Next I added more grass using a stamp from Stampscapes.  And I added some birds also from Stampscapes. As you can see it is a really simple scene but when I added the gazebo die cut it brought more life to the scene.

I again used my sponges and added inks to the scene before I layered it onto black card stock and then again on to a raspberry/beige duplex card base.

So this is showing that sometimes one can rescue something you don't like and redo it. I always try before I toss it in the garbage. I am glad in this case I did.

Thanks again for stopping in and hope your day is awesome.

Oh I agree, i am glad you rescued your creation. You found the perfect images to use with the gazebo; I love your sponging and the beautiful scene you created.

Verna, you created wonderful scene with this die cut and using some older stamps. I like both of them. This one and the post before it. You can gaze into the scene and imagine. Great.

WOW! I love your scene!