Many inquired about being able to see our pickup so here is a photo of the pickup he put in some parades this summer. It was his Dad's pickup and my hubby overhauled the engine and worked on the transmission and got it running. He also added new seats and a headliner in the cab. He was going to have all the dings and dents removed and paint it but since it was going to cost $20,000-$30,000 for that he instead went with the rustic look and just did a clear coat over all the rust, dings and dents. I like it as it shows that it was a working pickup. It was originally owned by Milbank Hatchery but when it was advertised on sale his Dad bought it. Also originally it was painted white. It sat in a covered shed for over 20 years without it being moved so it is nice to see it up and running again. 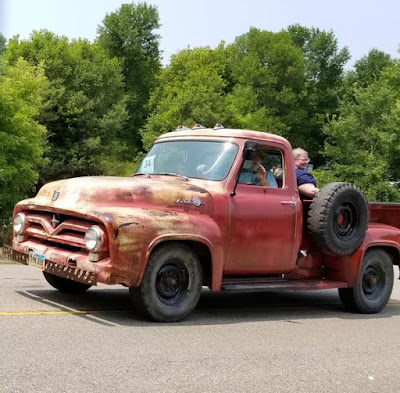 Also in one of the parades our son-in-law drove a tractor of Arlin's that was a Farmall Model H that had a cab on it. That was an add-on feature but did not come orignally with the tractor. And as you can see my hubby had to get in character and wear his old overalls and straw hat. Hahaa!

I hope you enjoyed seeing the pickup and the tractor. I had a video of them in the parade but could not figure out how to add it to this post.

Well, thanks for looking and have a good day!

Wonderful post! So great to see the old pick-up and I'm sure it brings many fond memories to you, it is perfect as it is! Great to see that you can enjoy it again after sitting so long, thank you for sharing

SO cool!!! Love both of them... nothing better than old stuff on wheels...lol! Sorry it's been so long!

What a great old truck! It must be so fun to drive that down the road. I like that your hubby kept the rustic look of the truck. It just seems to fit perfectly. My hubby wants to find an old truck someday too. I'll have to show him your post.

Great pictures. They don't make trucks like that anymore - it's a real workhorse and I'm sure was a big hit in the parade. Love your hubby's overalls and straw hat with the tractor.

TFS those photos of your truck and tractor! My husband has been a Ford man all his life, and he loves the old trucks looking as they did back in those days! I'm glad after sitting for 20 years your husband brought it back to life! They just don't make 'em like that anymore! Love the tractor too and your hubby is appropriately dressed for driving one :) Thanks for posting these :)

These are so neat! Thanks for sharing these old vehicles and this part of your life.

How fun is this. I bet the parade is a lot of fun and nostalgia with those vehicles. I remember the Farmall name.

I haven't heard about a Farmall tractor in a long time. I loved seeing these pictures. How fun to drive the old truck. [Bunny]

This makes me so happy! I love that he kept the truck so rustic and real! The tractor is cool too! My hubby works every day in bibs!

Love seeing the pictures! How great he got the truck running!

Thanks for sharing Verna, great memories for you all and I enjoyed reading the post x.