Yesterday morning it occurred to me that I needed two anniversary cards for my son and daughter-in-law and for my daughter and son-in-law who have their wedding anniversaries two days apart. So I made two of this design but one of the cards I already sent off as it has to travel to Japan. But they were similar so this one will show you what I did with the combination of digital stamps, stencil and a die. 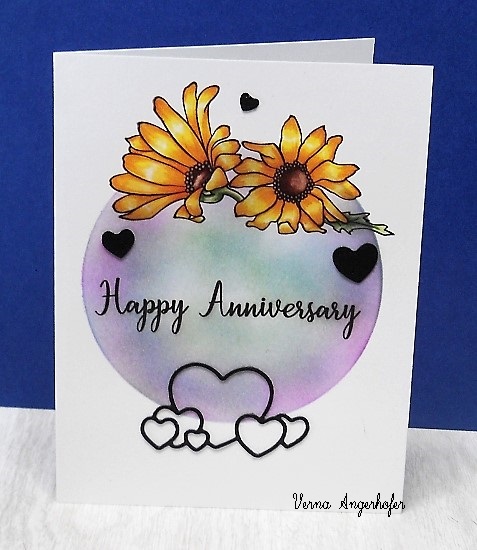 The pre-colored daisies digital is from the Jan's Digitals Pumpkin Blessings set. The sentiment is from the Artsystamper Digitals Artsy Sentiments set. I used a round stencil from Picket Fence Studios and brushed on the colors I wanted to use. I could have quit right there but I felt something was missing. So I diecut the hearts design which is from Cutplorations and added that to the bottom and with some of the negative hearts I added them also for extra embellishment. It took me very little time to do this card. What took longer was trying to locate the supplies. I also added a sentiment inside and wrote a note.

Another week has whizzed right by and here we are to Friday. I have company coming so I may be quiet until next week sometime. It seems there is always something going on in the summertime. Thanks also so very much for the visits and wonderful comments.

Until next time, take care and God bless, Verna

So pretty! I know your family will love these!

This is lovely. Gorgeous color combo 😀

I love this design,Verna. The flowers are amazing, the sentiment has a lovely font and the hearts are the perfect finish. Our daughter and her hubby arrived this afternoon. We will be super busy for a while. Sending you both lots of aloha 🌴🌺🐳❤

What a beautiful card and the blended colours look amazing. A stunning card x.

Gosh so close and so beautiful is your card x

This is beautiful with those soft colors and little hearts! I'm sure your children and spouses will love that you made this just for them!

Beautifully colored and the background is really lovely. Your children got married so close to each other. Ours married 4 1/2 months apart. I thought they were trying to kill us. Ha Ha! They've both been married over 20 years. [Bunny]

Wow, this is a wonderful anniversary card. Adding the cut hearts added just the right touch to the card. I do like that brushed background. Summer is always so busy. I feel like fall is a nice transition before the hustle and bustle of the holidays.

Oh, how lovely!! I just love the brushed on color within the circle, so pretty! Lovely flowers! And, great choice with the heart die cuts at the base!! The anniversary cards will be cherished, I'm sure! Enjoy time with your visitors! Take care, hugs!!

Beautiful use of the digital set, Verna! Pure loveliness! xx

Beautiful! Wow, this is fantastic and will warm the hearts of the recipients!

This is beautiful! And I love that spotlight! Wonderful design!

I love the way you used all the elements together. Great card!

Love this CAS design. The flowers on top of the sponged circles are gorgeous and the hearts are the perfect embellishment.