Today is a dreary and rainy day which makes one feel tired and chilly! But in hopes it might help I decided to make a sunshiny card design with the colors of oranges and yellows. This card will be entered into the Mod Squad Blog Challenge, Scrapy Land Blog #49 Challenge and The Crop Stop Linky Party #20 Challenge. 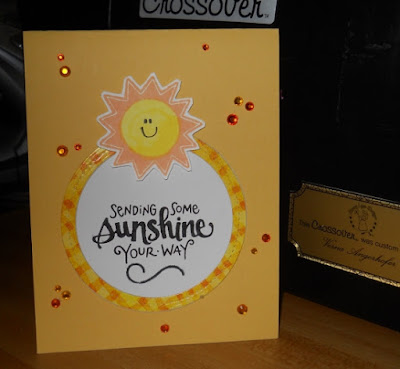 The sunshine and the sentiment are from a set from Technique Tuesday which I was fortunate to win and it is called Hello Sunshine. I tried to make the sentiment the focal image by framing it with a die from Die-Namics. I cut the frame three times and popped up the pattern paper one on top to give it more dimension. The final popped up frame was added with small pieces of Scor-Tape. I also used Scor-Tape to add the center portion which contained the sentiment. 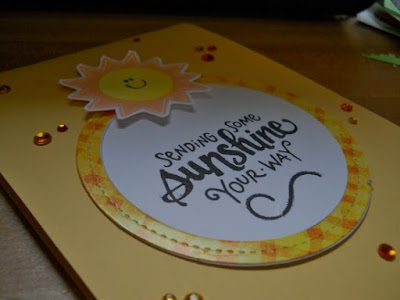 The inks used for my card were all Tim Holtz Distressed inks. For the sentiment and smiley face in the sun I used Black Soot. The sun was inked up with Dried Marigold and inside the sun I used a Distress Ink marker called Squeezed Lemonade. 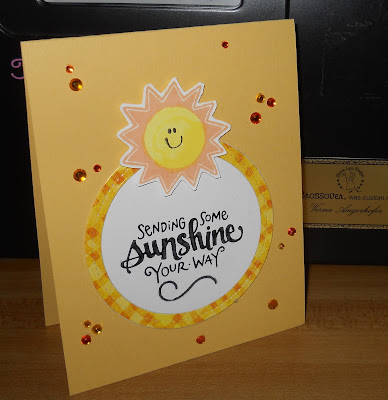 The sun was then popped up over the top portion of the frame using some Scotch Double Stick Photo Tape. The last thing I added to the card was some yellow and orange rhinestone gems. 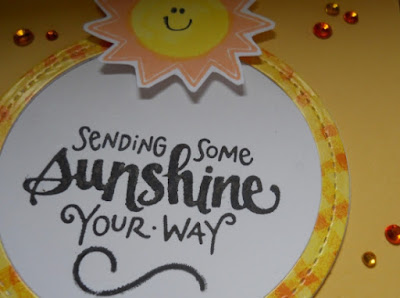 Well, making a card with sunshine on it brightened my day. I hope you have a bright and cheery day going on as well. And, thanks for stopping by and for the wonderful comments.

So fun and bright and cheery! Love the framed effect and the gemstones are an awesome embellishment.

Great font with the cute sun

Such a bright and cheerful card, Verna! This will surely make someone's day when they receive this happy mail!

You made my heart smile all over with this image and design! It's so happy!!! I love the layering of the die; that takes patience but look at the depth!

Great "happy" card! I love your layout and the cheery colors you chose!!

Who cares if it is raining, with a happy card like this one. I could see it as a shaker card too. Love the bright yellow Happy!

Let the Sunshine in! face it with a Grin!! ...Open up your heart and let the sun-shine in!! : ) heeheehee can you just sing along with that song Verna!

Your card is a breath of fresh air on a dreary day! Perfect in every way to brighten up your mood!

Oh I hope your pretty, cheerful sunshiny card drove away the rainy day. It's fantastic and soooo happy! Love that big bold sentiment! Thanks so much for playing along with us at The Mod Squad Challenge Donna, Challenge Host.