April showers should bring the May flowers. So on that idea I made a card depicting both the showers and the flowers. 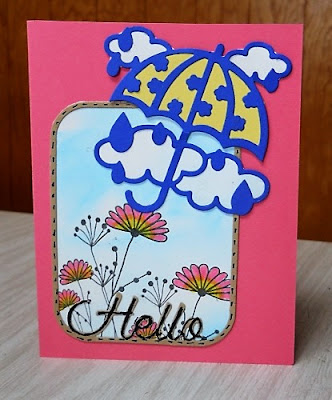 I happened to have a Penny Black Hello frame die that someone had gifted me and used that to showcase the pretty flowers from the Gina K. Designs Hopeful Flowers stamp set which were stamped with Gina K. Designs Jet Black Amalgam ink. I colored the flowers with Copics. I also did some sponging of blue ink for the sky using my Life Changing Blending Brushes. I had to fussy cut around the die frame but it worked out quite well. And, I also did some doodling with a Bic Ultra Fine black marker on the frame as well.

Next I took the Cheapo Die called Rainy Day and die cut it from a royal blue card stock and added some yellow to the umbrella and white to the clouds. I then placed this in the upper part of the card to depict how the April showers bring the May flowers.

Oh I added the dies to the card by picking up adhesive from the Ecstasy Sticky Specks sheets. I love how easy that worked and it was a much easier and faster process in assembling the card.

I am entering this in the Dies R Us Challenge #119-April Showers.

April showers are in the forecast for this week so hopefully, they will help melt the rest of the snow so that very soon we may see some May flowers too. And, my cleaning is pretty much done and now to the baking.

This is really sweet Verna! I have this same PB die and you inspire me to bring it out and show it some love : )

Have a wonderful week!

How cute, Verna! So glad to hear about the sticky sheets--gonna try them.

This is just awesome Verna! Love the scene you have created! Thanks so much for playing in our ‘April Showers (water related)’ challenge at Dies R Us. Good Luck and please come back again soon!

This is great! Love that cute rainy day die and the way you backed it with different colored papers. Your flowers look great too!

What a pretty little scene and the sunshine and showers looks perfect on your beautiful card. Great fussy cutting and love the mix of colours x. Hope the showers melted the rest of the snow and you'll soon be seeing May flowers x. Hope you enjoyed your baking? x

Fun card! I really like your hello die frame. That is neat. I have not heard of that kind of adhesive. I will have to keep my eyes out for that!

I saw this umbrella die on another blog and thought it was so cute, and now here it is again! I love the blue and yellow and how you've used it with the flowers and frame. Nice, Verna!

Beautiful card and perfect way to showcase April showers and May flowers.

I felt up to being creative so I made another simple card using a stencil from Artplorations which is a division of Stamplorations. Right n... 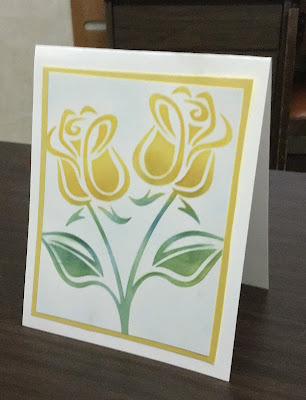