As you recall I am trying to make a few Christmas cards each month and so with that in mind I remembered I had this Gina K. Designs stamp set called Snow Birds illustrated by Alicia Krupsky which I thought I should ink up. I confess though I had to look up to see what kind of bird this one was that I had used and the more familiar name for it is Titmouse. I also had to check to see what colors the bird were too. What would we do without Google! 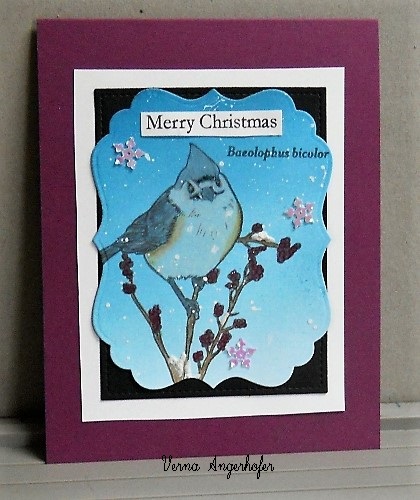 The first thing I did was brush on some color to my main panel and I went for an ombre look by using the colors Tranquil Teal and Sea Glass. Then when I had my panel done I used Black Amalgam ink from Gina K. Designs to stamp the bird. Next I grabbed my Prismacolor pencils and colored in the image.

I die cut the bird design with one of the Gina K. Designs Decorative Label Dies but before placing it onto a black panel that was die cut with the Gina K. Designs Large Single Stitched Rectangle die I took some watered out white acrylic paint and with a fine paint brush flicked some specks on it to make it look like snow. After the two die cut panels were together I placed it onto a piece of white card stock and then fussy cut around the edges to make a frame before fastening it to a Plum Punch card base.

The last steps for my design were to add some sequin snowflakes and the sentiment which was from the Gina K. Designs A Year Of Borders stamp set which was illustrated by Melanie Muenchinger. The card was finally finished with the addition of a white panel inside so that a message can be written or stamped. Oh, I forgot that I did add a bit of snow to the branch using a Marvy Snowmaker pen. After you apply the white paint you puff it up with your heat gun. 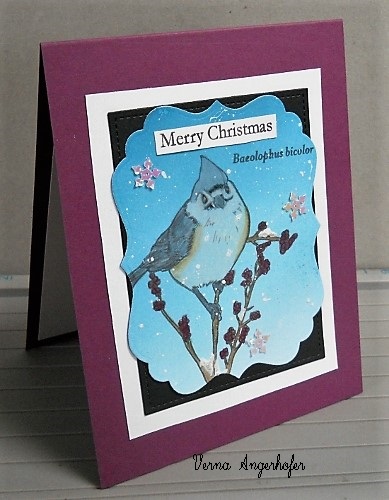 I had hoped the white pencil would have made the bird look a bit more white then it did but I guess even so one gets the idea. At any rate, I hope you like my design.

It is a dreary and cloudy day but as far as I know no snow expected. But we could get a few rain showers later today. Regardless of the weather though I am so happy you have stopped by and I love to see what you have to say.

It's nice that you had a clue so you could look it up. Most bird stamps stump me. They don't look like the birds we have around here, except maybe chickadees and robins. Beautiful card and, yay, it's Christmas! Good for you! I've seen several Christmas cards as I made my blog rounds today and I'm happy to see more people are stamping ahead these days. There will be fewer stressed stampers at Christmas time! Your coloring and the shaded background are so nicely done. Love the snow, too. Looks like a twilight scene. The plum base is really lovely with it. Nice all over, Verna!

What a sweet card! I wouldn’t have known what the bird was, either, but he is so cute. I like the ombré background and the little bits of snow, especially the puffy snow on the branch!

I love the shaded blue background you stamped this bird on. It turned out to be a beautiful card, well done!

Good that you took the time to do the research as you got a very realistic card. It looks chilly and snowy!

Sweetest little Titmouse ever! They are a prolific bird in our area, and I enjoy watching them in the feeders, swimming in the bushes when sprinklers are on, or playing in the "waterfall bath" they enjoy. You've captured the early morning hours beautifully. All your cards are dear, and beautiful, Verna. The easter bunnies in the card before this one are adorably playful and colorful! hugs, de

beautiful merry Christmas card...love them.
have a great day

Your card is so tranquil and beautiful. You did a great job coloring your image. Love the flecks of "snow" you added to your background.

This is a lovely Christmas card, Verna. Lots of details and beautiful coloring. I love that plum cardbase.

Wow, Verna, this is absolutely gorgeous! You coloured the image so beautifully and realistically that I thought it was a clip art image! Well done! Is Alicia one of Gina's daughters? I only know Rina from the videos.

This bird is beautiful! You worked hard on him. Love the snow you added.

Beautiful coloring of the bird & love the white splatters!

gorgeous card...love the look of the bird.
xx Karen

Yes google is so helpful. What an adorable card and love the ombre effect. I love that the white is slightly muted Verna as it blends in with the look. Wonderful colouring, pretty design, beautiful image and a beautiful card x.

Verna, this is gorgeous. The coloring on the bird is wonderful. The background is eye catching. Your purple card base is a spot-on choice!! It totally brings out the colors in the snowflakes.

So beautiful. I love your pretty bird. I love hearing the birds chirp in the Spring.

This turned out awesome... with the bird not being totally white it makes it look like an evening in the snow... just beautiful!

Beautiful card and ombre Verna, I often search colors for birds, other animals and flowers. I do feel with flowers I can have fun with different colors as well.

what a beautiful background for your bird! seriously gorgeous card! Thank you for entering the Gina K Designs monthly challenge