With a new year begins a new round of Darnell's Twofer Challenges. This No. 12 one has the theme of birds. I chose to go more traditional as I needed an anniversary card and also will be needing lots of birthday cards. 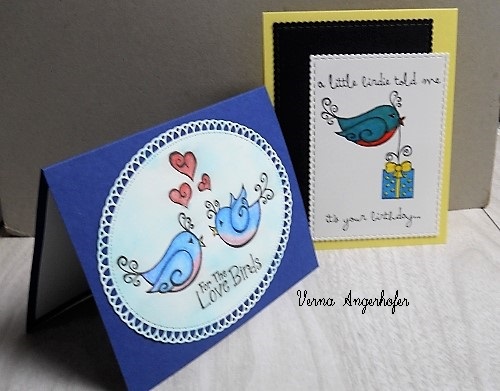 Both cards used the same bird image and the design of the cards was made two different ways as well. 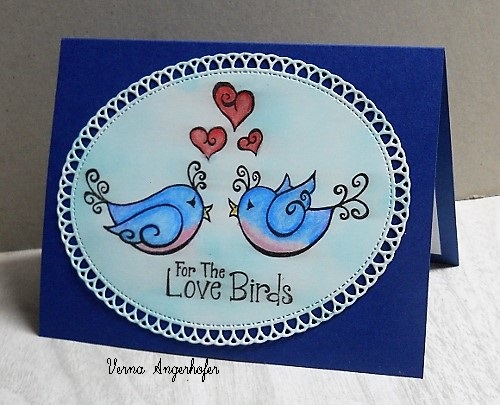 The images on the Love Birds one which I thought would make a great anniversary card were all from the Inky Antics Swirly Birds stamp set. The sentiment is also from that set. I colored these in with Prismacolor pencils and Gamsol. I also brushed on some light blue around the birds design. They were die cut using the Gina Marie Designs Loopy Ovals and then placed onto a denim blue card base. I also added a white panel inside for a message. 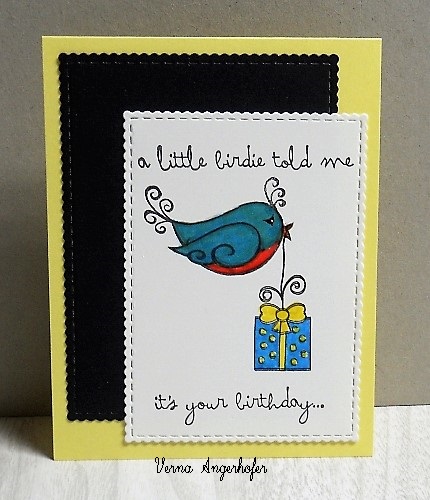 For the birthday version using one of the birdies I took my Bic Markers and colored in the image. The gift image was taken from a Gina K. Designs stamp set called A Little Something. It was originally three presents but I masked off two of them before adding ink. Then I carefully removed the mask and proceeded to add the package to the card panel. I hand drew the string connecting it to the birds beak. And, the sentiment is from the Stampers Anonymous Tim Holtz Collection called Crazy Talk. Both the focal panel and the black panel were die cut using an Unbranded stitched scalloped die set. These were staggered onto the yellow card base to create the card design.

Thanks so much for visiting and I hope you join in on Darnell's Twofer challenge too. I always enjoy making entries for it.

Love these Verna! Love the softness of your sky for your Love bird card and the way the bird is carrying the birthday present on your second card! I peg you as a winner at Twofer! I sure hope to play along with that one too!

What a cute swirly bird set that is, Verna! I love the flourish feathers on them and think you did a great job coloring them and the background! I think I might have to check out that Loopy Oval. I actually used something NBUS yesterday so I guess that's a spot to fill on Mt. NBUS, right?, lol!

You did a great job masking and designing your second card as a birthday card! Love the offset panels in black and yellow and your swirly choice of font on the sediment was inspired!!

Thank you so much for playing in Twofer Card Challenge #12 and for your kind words encouraging others to join in!! Hugs, Darnell

Both cards came out great! I like how the birds look colored with colored pencils as well as with alcohol markers.

Oh MY! These are winners for sure. I love all of the detail and the dies and the coloring and the design. So amazing and I am out of breath.

Beautiful job on these Verna! I especially love the "sponged" background on the first one. What ink did you use, it is so beautifully blended? How creative to have the little bird with the present hanging from his beak. Wonderful cards!

Such adorable cards, I love them both. Those sweet little birds are beautifully colored and your designs are just awesome!!! Well done, my dear!

Wow! Really makes a difference how the little birds are colored! Each card is delightful, Verna, so full of "tweet-ness" and love. I admire how you get your sentiments on so straight! Beautiful dies, too! hugs, de

These are adorable as birthday and anniversary cards. The love birds are so sweet with the hearts above them and that great circle die. I love Gina Marie dies. We had the same idea to suspend something from the beak and yours is so cute with the curly bow to match the bird! Very clever, Verna.

Sweet cards Verna! LOVE your love birds. :) Great colouring with coloured pencils. So pretty with the framing and dark card base. Great design! Your birthday card is also wonderfully coloured with colour layering with a pretty scalloped edging. Thanks for joining us at Twofer Card Challenge!

Adorable and beautiful cards!! So fun AND creative!! Love the soft pretty colors too!! I am still trying to figure out what I want to do for this challenge!!

Verna, I love your Swirly Birds so much I went and looked up the stamp set. So cute! Inky Antics has always been a favorite. The love birds appear to be coming in for a smooch. Such a pretty oval die on that one with the birds looking all sweet in blue with their pink tummies. I love how you switched up for a birthday card, too! The font and the present are perfectly coordinated with the bird. Clever! You always do a great job with the Twofer Challenge and I'm glad to see you this month, my first month on the team. Thanks, Verna!

Lovely and super cute cards, perfect for their occasions. I like how you altered the gift image and made it work for you.

What an adorable Twofer! Cute idea, to have the birthday bird carry the gift!

Brilliant cards Verna.. really love them both!
And your red hearts cards up ab9ve as well! Yup few new things here too! Hugs Shaz in Oz.x
PS if able wpuld love you to pop over to my new blog.. ta!Xhttps://wonderfulwordsoflifebyshazinoz.blogspot.com/?m=1

AWE, these are so sweet - great coloring using both mediums.

Way to use those birds for 2 different cards! Love the dies you used along with the great coloring of the birds! NJ!

O, what a wonderful birds who are flying to the loving couple and to the birthday kid. :-) Great coloring with both media.

Wonderful cards Verna, it took me a little while to realize it was the same bird... Awesome job with the challenge

Those birds are so cute! Great way to use your stamps!

I particularly love the coloring you did on the love birds. Great job matching the swirls above the present to those on the birds.

Verna, I saw these tweeties in the Twofer Gallery and just had to stop by. I just love both designs! Another great job!!!

These are both really cute cards!