Grow Old With Me

Forty-five years ago I married my soul mate, the love of my life. Sure seems like it should not be that long ago, but that's the truth! LOL And, here we are with four children and five grandchildren later. For the most part we have had a great life together and have been truly blessed.

It wasn't until I saw pictures of him as a little boy that I realized we had seen each other early on in life when we were 10 and 8 years old. We both were visiting my cousin, Jim, who was in the hospital.

It was many years later when we met up again and this time he was with another girl. Oh, I thought she was so lucky. I even told my sister Alice that I hoped that some day I could meet up with him again and marry him or at least find someone else very much like him. He was such a nice young man.

But the timing was not right! It took a couple more years before I saw him again. He was home on leave from the Air Force and I recognized him. So with a burst of courage I went over to him and said "Hello".

He remembered me but did not remember my first name. But he said, "I know you! You are the Brandt girl who drives the blue Ford with a streak of dust behind it." LOL So apparently I made some sort of impression on him.

That was the start of our courtship. We dated for the six weeks leave he had and when he left again for the Philippines and a short stint in Viet Nam we kept up the romance via letters. I wrote him every day. He wrote as often as he could too. In fact, his sister used to look me up on my noon break from work to find out the latest news about her brother. They only got a few letters whereas I had many more. And, those letters meant the world to both of us. I used to read his over and over again until the next one arrived.

When he came home in February of 1969 we kept dating and in June of that same year he proposed to me on my birthday. I was so happy and of course, I had to say "Yes". Since we both grew up on a farm, we decided that was what we wanted to do as well. So after our wedding on a Sunday afternoon in my home church we took a short honeymoon to the Black Hills and on our return moved onto his family farm. And the rest is history. We have lived there ever since and are still farming too!

So my card I created for him is from the Gina K. Designs stamp set called Farm Life which is illustrated by Theresa Momber. I love that set. I think I used it for a card for him another year, but I still think he will like it. 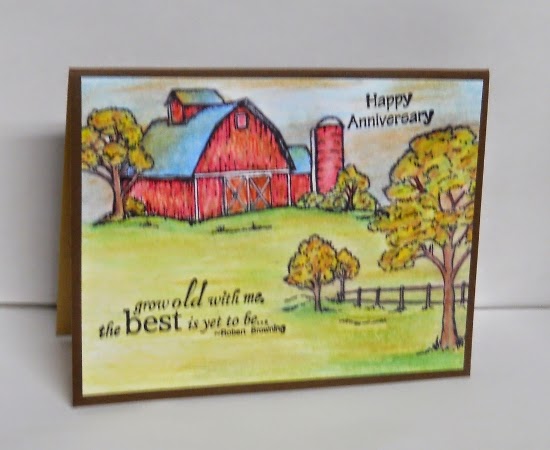 I used the Spectrum Noir colored pencils to color in this scene. I tried to make it look like early Fall with the grass and the leaves changing colors. And, I just love the sentiment. I thought that a perfect addition to the scene,

We are going to go out for lunch today after church and celebrate. Yipppeeee! I don't have to cook or do dishes!

Thanks for stopping by and hope you did not notice that the Happy Anniversary sort of got a bit crooked. Oh, well! If it were perfect you would not know it was a handmade card, right?

An beautiful sentiment with your "farm" scene in mind - I know you are both so busy with the farm, both growing and then harvesting and canning. We do not do it on your scale, but love living rurally, and growing our own food! CONGRATULATIONS - My husband and I married after a 6 week "romance" - I guess we both "just knew". hugs, de

What a beautiful love story! Your card is beautiful too! I love that stamp set and that wonderful sentiment, so appropriate for the occasion. Happy Anniversary to you both

wow, this is gorgeous...fabulous coloring. I am having a giveaway on my blog, comment here to enter...
http://paperieblooms.blogspot.com/2014/10/goodies-giveway.html

I really enjoyed reading your love story. Happy Anniversary and many more!

Stunning story, Verna! Here's to many more years. I hope you printed this post out and included it with his card. Then he has something he can read over and over again. And, I didn't even notice the anniversary saying was crooked until you mentioned it. From Laura P

Such a sweet and romantic story, Verna! And your card is a beautiful reminder of all your wonderful years together. I wish you and your husband many more years of continued happiness. Happy Anniversary!

I loved your story! HAPPY ANNIVERSARY! Great card today as well but your story stole the show LOL

Loved your story Verna - hope you both have MANY more happy years together. Perfect choice of card and love how it all finished looking beautiful. HUgs

I just saw this and had to leave a note. Love your beautiful love story. Forty five years and counting, of happiness and family. You are a very lucky woman. Great card for the occasion too, I love making special cards.

Finding that person to share your life... that is a blessing in itself, better than any lottery win! Congratulations, Verna. Here's to many many fulfilling years ahead.
hugs, Asha

Wonderful story to go with this great card. I'm so glad you have had (are having) a blessed marriage with your sweetheart.

You did an amazing job at coloring this scene! Thanks for sharing!