Today I brought out an older Gina K. Design set called the City of David. I wanted to use a negative die cut frame and build a scene inside it. I thought maybe a more religious card design would look nice in that frame. And, I added some Versamark ink around the edge of it with a Versamarker pen and then embossed it with gold embossing powder from Gina K. Designs. So the frame was now ready to place a scene in it. 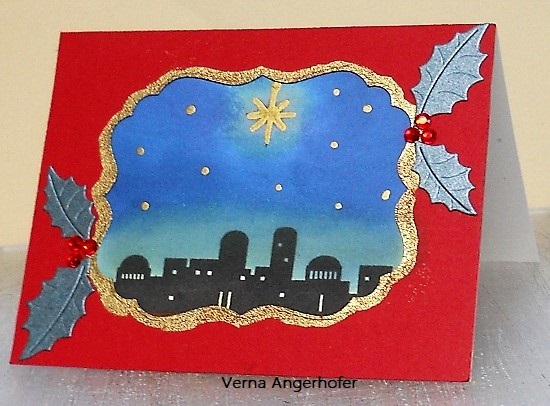 On a white card base I used Gina K. Designs inks to sponge in my sky line and then stamped the solid images with the black over this sponged area. I could tell that the city would not be all included in the frame but only a portion of each end is cut off. I also took a Sailor Gold Rolling Ball Pen to go over the large stamped star and to add smaller dots to represent the little stars. I placed the prepared frame over the top. 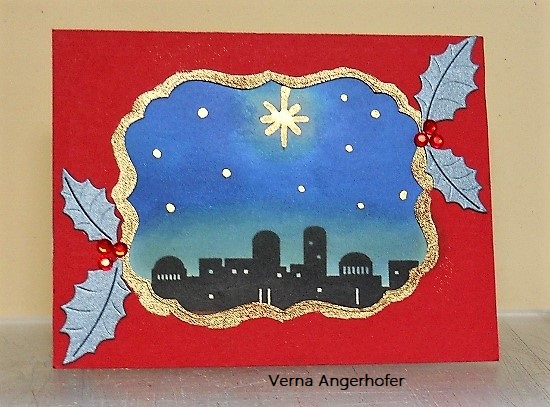 I had some leftover holly leaves that were die cut with a Cheery Lynn Designs die and I added them on opposite corners of the card along with a few red rhinestones for the holly berries.

I know my frame isn't perfect as I have shaky hands and it often shows  up in my artwork, but even so I think this makes for a fantastic looking card. I hope you have enjoyed seeing it. I think this is a true representation of what Christmas is really about.

Thanks for stopping in. I always love to see your comments on my cards. You have a great evening now.

I'm trying to leave a comment, maybe you'll see three of these. lol
Love the idea, and the picture is so right for the Christmas season.

Beautiful card! I love the silhouette stamp and the gold embossed frame.

Love how you framed the city and the sparkle and pretty holly! I have this Kit and don't use it as often as I should! Thanks for the inspiration!

So very pretty. It's hard to find religious themed stamps(at least around where I live)...and I really like this silhouette. I have a similar PBlack one, but it's outline. I like the shaded night sky with Bethlehem in shadow and that splendid shining star. Love the way you've done the frame and it looks perfect to my eyes. Didn't know if the frame was covered in gilding flakes or something else, but what you think was 'shaky', adds to the look I think. Love the holly leaves trim, and it's so festive! Well done!!! TFS & thanks for the inspiration on this city scape.