I was running low on my tape runners which I always get from Crafter's Companion and while at their website I saw this Sheena Douglas stamp set called Wishes of the Season which had the most awesome scene stamps  and sentiments. There was also dies that went with the set if you wanted them but I only purchased the one with the deer and trees on it. It is a huge die and if you used it the way it is it would be a very large square card design but I chose to cut it down to an A2 size card instead and I am very pleased with the way it looks too. 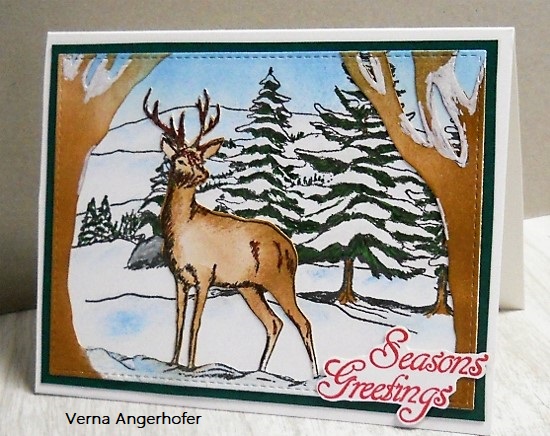 I think though I should have left the trees on the outside of the die cut area alone and not added the snow with a white paint pen but since the deed was done I left it go. Still I guess it is not too bad and does sort of go with the snow on the evergreens. The die cut part is the outer trees, bottom snow and the deer.

First thing I did was stamp the deer onto white card stock and then I aligned my die over that as it cuts very close to the image. I just thought I could not stamp that image into the frame after die cutting it since it is a rubber stamp and my eyesight is a bit off. This method worked better for me.

Next I stamped the background which is the evergreens with the snow using Gina K. Designs black ink. I also stamped the deer with that ink. I filled in the evergreen areas with a green Bic Mark-It alcohol ink pen and then sponged on some blue for the sky and the snowy areas. I also added some Wink of Stella to make the snowy areas a bit more shimmery. I could not get it to show up very well though on the photo but I think you get the idea.

Lastly I then sponged ink onto the deer and the outer trees die cut. I added them to the scene where I wanted them with adhesive and then I die cut the glued together layers with a My Favorite Things Di-Namics die. This panel was then added to a Gina K. Designs Christmas Pine card stock layer before I added it to the white card stock base.

Dies and stamps used are from Crafter's Companion Sheena Douglas Perfect Partners series using the Christmas Deer die and the Wishes of the Season stamp set. I also used a stitched border die from the My Favorite Things Di-Namics die set called Blueprints 29.

Well, I certainly am so happy to see all of you stop by and visit. Thanks for the wonderful comments too.

I can certainly see why you were drawn to the incredibly beautiful image, Verna! AMAZING. And your soft coloring choices, and deep natural shading is especially lovely. I was admiring the snowy dimension on your trees, and then read that you wished you hadn't used it Not sure why you feel that way, because it REALLY makes the scene cohesive and extra beautiful. LOVE IT! xx

Gorgeous deer and a brilliant background.

Awesome creation! Loving the sponged deer and the trees with the snow are beautiful. Gorgeous background and the stitched frame is just perfect to pull it all together.


Stunning card. I always think a stag looks quite majestic. I enjoyed reading how you made your card. It always helps to read how others construct their cards.
I like the snow on the die cut gold mirri trees. I think it does make them tie in with the stamped snowy trees.

Thanks for taking part in the October Rudolph Days Challenge.

A very pretty scene! It looks right for the deer to be on the edge of the forest with the less dense pine trees in the background. I think you are being too hard on yourself. Nothing jumped out at me as being wrong with your card, and even after I read what you regretted adding, I still thought it looked great!

This card is so pretty with the deer and snow scene. Everything is in perspective and the snow should be on the trees. They were standing there when it snowed on everything else! We are always so hard on ourselves and see what we think is wrong!

Well I think the snow on the trees looks great - it would have looked all wrong if the evergreens had snow on them and the die cut trees had none. Wonderful card

This is just beautiful. You are the Master of Scene Cards, something I'm not so good at. I love this!

What a beautiful stamp, I can see why you had to have it! Great coloring for a lovely winter scene!

Fabulous scene, you did it perfectly and love all the details you added. Thank you so much for participating this week at the Mod Squad Challenge

Verna,
I saw your card on the Mod Squad link up and had to pop over and tell you how gorgeous it is! I love the snow you added on your trees! The whole scene is just awesome!

I'd love for you to link it up over on the Cropstop blog too -- you can find the current link up here:
www.cropstop.com/blog/autumn/october-challenge-link-party-33

I like it! Despite my aversion to deer - they live in my backyard and eat EVERYTHING!!!! :(

Thanks so much for linking this up to Cropstop, Verna! I hope you'll be able to join us again and help us reach our goal of 100 links this month!

What a gorgeous Christmas card, wonderful scene you've made.
Thank you for joining us at Simon says Stamp Wednesday Challenge
luv
Debby