Normally I am not a fan that much of purple when it comes to making cards but for some reason I am loving it for Christmas card designs. And, since I already had a lot of the supplies on the kitchen table I proceeded to make two Christmas card designs using the new stamp set I got from Gina K. Designs called Peaceful Holidays. It is illustrated by Theresa Momber who is always coming up with some fantastic scene images in her sets.

First up is the card I titled Peace Dove. 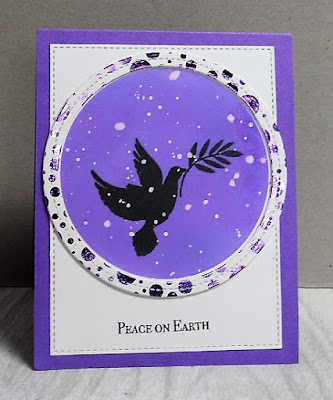 I cut two panels of layering weight white card stock. In the center of one I die cut a circle using a Gina Marie Designs die. I laid aside the positive circle for another project and instead used the negative as a mask. I like to tape it on each edge to the second piece of card stock so it won't slip when I do my sponging. I sponged the card with Gina K. Designs Wild Lilac ink until I had it solid. Then with Gina K. Designs black ink I stamped the silhouette dove image on the set. Before I removed the mask I took some white acrylic paint and mixed it with a bit of water. With a small paint brush I picked up some of that mixture and lightly tapped on the brush so that I got some dots that would appear as snowflakes. I then removed the mask and die cut the panel out with a stitched border die from the My Favorite Things Die-namics Blueprint 29 set. I wanted a frame so I used the My Favorite Things Die-Namics Single Stitched Line Circle Frame set and cut out two white ones and a third one from the Gina K. Designs Hot Dots Foil Mates which I had foiled with some of her Wild Lilac Fancy Foil. I glued all three frames together so that I had dimension around the sponged scene. I then finished the card by adding it to a card base of Gina K. Designs Wild Lilac card stock. 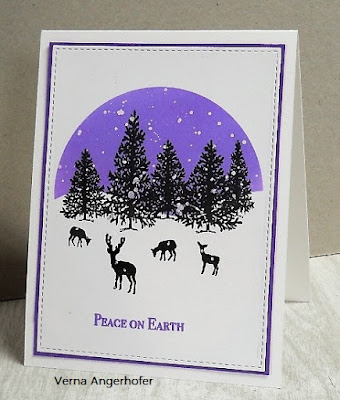 I also uses the same circle mask to do some sponging but before I sponged I also cut a snow line and placed that under the bottom of the mask. Once I had the sponging done for the sky I stamped in the trees and the deer. Then I added blotches of snow the same way with the acrylic paint and water mix with flecks off a brush. After removing the mask I also die cut that panel with the Die-Namics stitched die from the Blueprints 29 set and then added it to a layer of Wild Lilac card stock which I cut by hand. This was then placed onto a white card base.

These are fairly quick and easy cards to do as they use solid silhouette images so there is not a lot of coloring involved. I really am happy with the way both look too. So all in all a very productive day. And I wanted some snow in my work as this morning we woke up to a cover of snow on the ground and strong winds. It just seemed right to make snowy scenes on a snowy day.

Well, that will do it for me today anyway. I think I will move away from purple too for awhile. Thanks for your continued support with your visits and comments.

You did a great job using purple. Both of these are gorgeous!

Love them both Verna! I see lots of bloggers are using purple for Christmas this year..so pretty!

Who knew purple could be a Christmas color, but these are just beautiful. I love that you have used the white and black as the only other colors. It just makes that purple pop, and also the silhouettes. GORGEOUS!!!!

I think your purple series cards have been fantastic! Such a 'cool' color to bring out the chilly crisp feel of winter and Christmas! Well done!

Fabulous! I love your use of the purple turned out awesome!

Two beautiful cards - I especially love the second one, such a pretty and peaceful little scene!

Love both of your beautiful scenes! Very cool looking. Thank you so much for participating this week at the Mod Squad Challenge